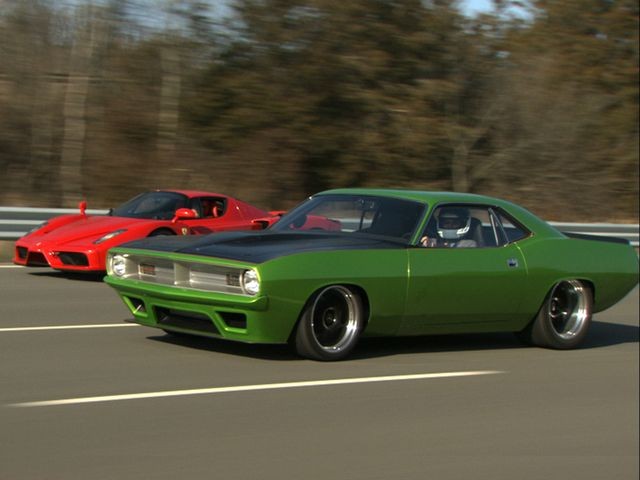 Besides the awesome aero cars (Dodge Daytona Charger and Plymouth Superbird), Mopar’s classic muscle cars weren’t exactly renowned for their slippery aerodynamics. To to push a ’70 E-Body past the 200 mph mark is quite the feat. Legendary Motorcar has been making a name for themselves doing muscle car restorations for a long time, but back in 2009, they decided to challenge a super car with a muscle car, namely, build a ’70 ‘Cuda to take on a Ferrari Enzo.

The ‘Cuda would be grafted over a complete race car chassis with a 1000-plus horsepower 522-cubic inch twin turbo’ed Viper engine, a Viper 6-speed manual gear box, and Viper rear end. Pleter Klutt, owner of Legendary Motorcar, is featured in the video below conducting a shakedown run of the ‘Cuda before handing it over to it’s owner. The 200-plus-mph run was made at Chrysler’s Chelsea proving founds, which is a 4.7 mile oval track consisting of 36 degree banking at the turns, and 0 degree banking at the bottom.

A friend of Peter’s volunteered to be Peter’s competition behind the wheel of a Ferrari-red Enzo. The track temperatures were initially quite cold, and traction concerns surfaced during the test session. Thankfully, after a couple of easy passes all seemed well, so the green light was given. The ‘Cuda easily pulled on the Enzo in the straightaways, but Peter noticed that even with most of the grille taped off, there was still too much air entering the engine compartment – lifting the hood 3-inches!

A little while later, the windshield trim came off and nearly hit the Enzo. Peter concluded the day taking one more run and topped out at 208mph, and called it a day, saying, “above 200 the Cuda’ was running out of aero and I was running out of cohones!”