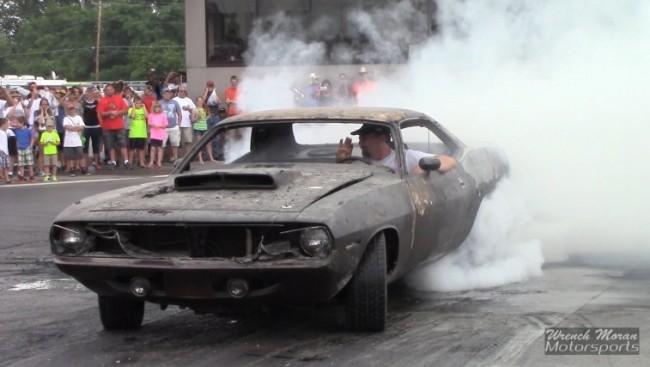 In the ultimate tale of making lemonade out of some pretty sour lemons dished out by life, the owner of this once pristine and complete 1970 Plymouth Barracuda saw his long term project burn to the ground. Although the fire did char the E-Body’s paint and interior, the heat wasn’t enough to melt his aftermarket Six-Pack style hood or buckle the sheetmetal. In fact, despite looking a little baked, the Barracuda seemed to have come out rather well.

The running gear was still intact – apart from needing all-new hoses – and required very little to get it to fire back up and spin the back wheels. Although hopes were dashed of entering the E-Body into a judged class, he did opt to bring it to the Mopar Nationals and thrash the tires in the burnout competition. Held between heats of the drag racing competition that took place at National Trails Raceway, located between Hebron and Kirkersville, Ohio, off of US Route 40, the track is found about 30 minutes east of Columbus, Ohio, and is home base for the annual Mopar Nationals.

In preparation for this year’s 35th anniversary Mopar Nationals, we thought it suiting to share this video from Wrench Moran, as we’re sure it’ll put a smile on your face. While we don’t know the ultimate fate of this Baked Barracuda, we’re hopeful that it has been (or is at least in the process of) restored back to its pre-fire days. Until then, watch as this charred Mopar roasts its back tires with ease.