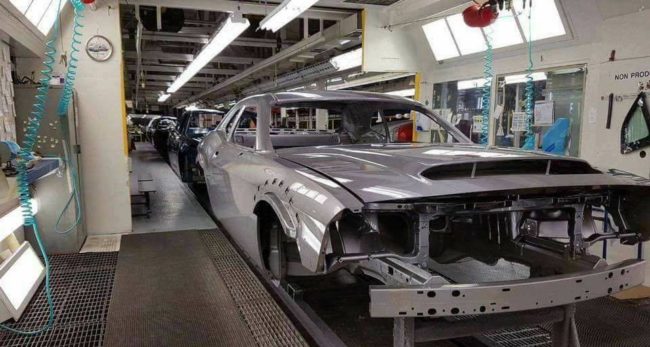 With modern technology these days, it’s hard to keep anything under wraps. You can find cameras on virtually everything and anything. That’s why it didn’t surprise us very much when a leaked shot of the new 2018 Dodge Challenger Demon surfaced all over the Internet.

It looks like somebody at the Brampton assembly plant is going to be getting fired, if they haven’t already. From our understanding, FCA likes to keep everything under wraps when it comes to new products and being as the Demon hasn’t been officially released yet, we don’t think this leaked shot is going to go over too well at FCA headquarters.

In the picture, you can see a Demon in the flesh coming down the assembly line. It’s hard to mistake it for anything else with the massive hood scoop. On the fenders, you can see the extra support added for the fender flares as well as the holes that will be used to secure them.

It looks like these flares will be Demon only pieces as the extra stuff added will make it pretty hard to add them to your Hellcat or other model Challengers. While the fender flares seem to be a love it or hate it thing, we are awaiting the official reveal before we pass off judgement on them.