If all you seemed to get was bad news last week, Mopar is here to cheer you up! Late last week, Mopar unveiled the next-generation Mopar Dodge Challenger Drag Pak. Built on the current Dodge Challenger platform, the new Drag Pak will come with the option of two engines: the brand’s first ever offering of a supercharged 354-cubic-inch Gen III Hemi or a naturally aspirated 426-cubic-inch Gen III Hemi engine.

First off, no. It is not a Hellcat but something else entirely. The supercharged 354 Hemi engine is built on a cast-iron block with a forged steel crankshaft, Mopar spec camshaft and a custom performance engine calibration. As Mopar says, “the 354 nomenclature pays homage to the heritage of the early Gen 1 Hemi engines, which originally displaced 354 cubic inches.”

The naturally aspirated 426 Race Hemi engine, on the other hand, is built off of a Mopar aluminum block with pressed-in steel sleeves and topped with aluminum cylinder heads. The 426 Hemi also features a custom engine calibration. 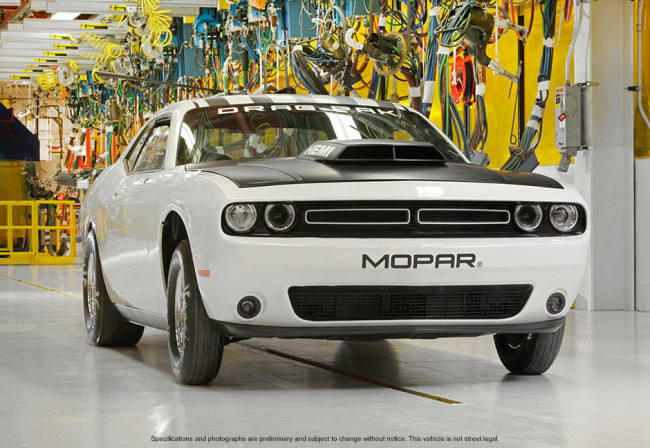 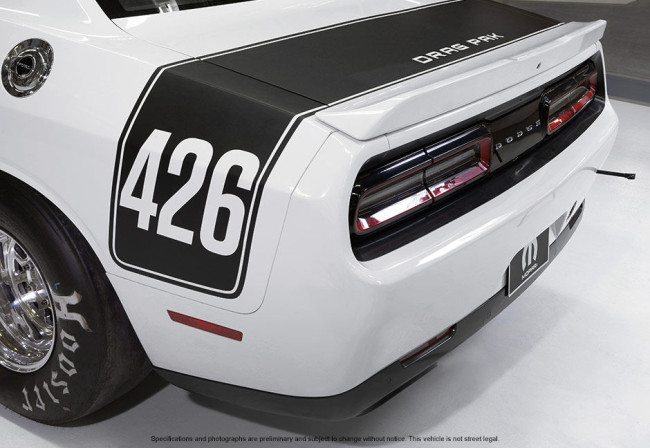 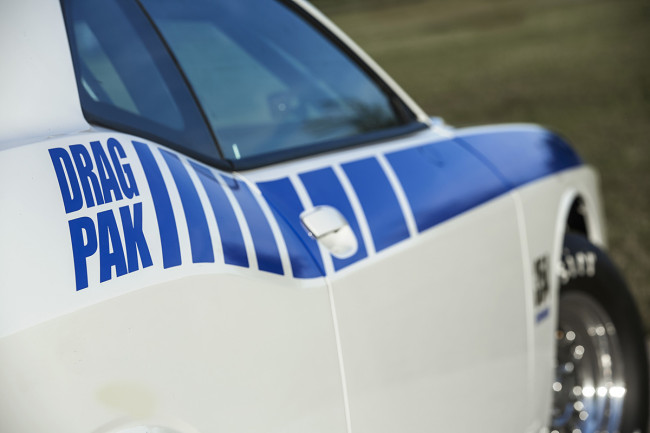 Backing both the 354 and 426 Drag Paks is a race-prepped automatic transmission (an upgrade from the previous generation gearbox) and includes a unique K-member and suspension geometry, with double adjustable compression and rebound struts. Out back is a four-link rear suspension with Panhard bar, Strange Engineering 4-inch solid axle with 9-inch aluminum third member, 40-spline gun-drilled axles, shocks with adjustable compression and rebound and an anti-roll bar. As Mopar notes, “the rear axle mounting has been strengthened from the previous generation Drag Pak to help the car launch faster and harder.”

Each engine package totes its own unique graphic identification package; the supercharged 354 shows a Mopar Blue stripe and a “354 Supercharged” graphic insignia, as the naturally aspirated 426 Drag Pak wields a horizontal black stripe with a 426 Hemi engine graphics.

Also new for 2015 is a redesigned full roll cage fabricated to NHRA specifications and interior with much of the Dodge Challenger interior retained, but with a Mopar gauge pack, driver and passenger lightweight racing seats, safety net and a five-point harness. 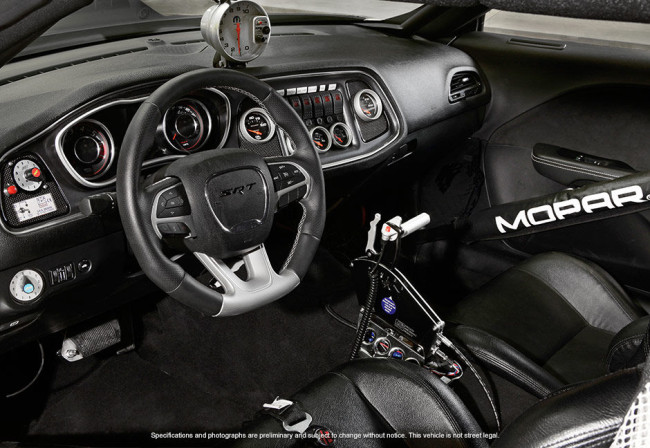 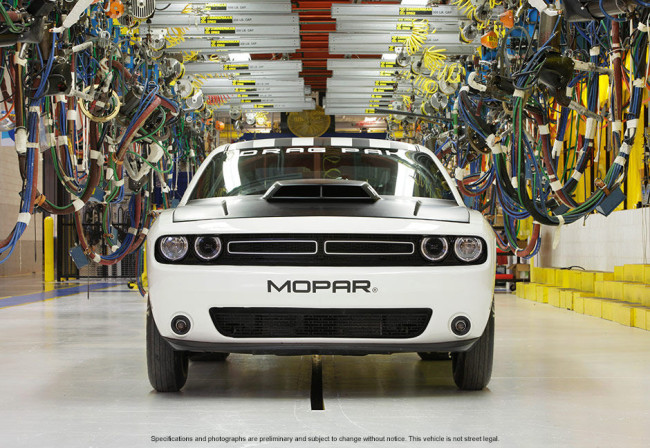 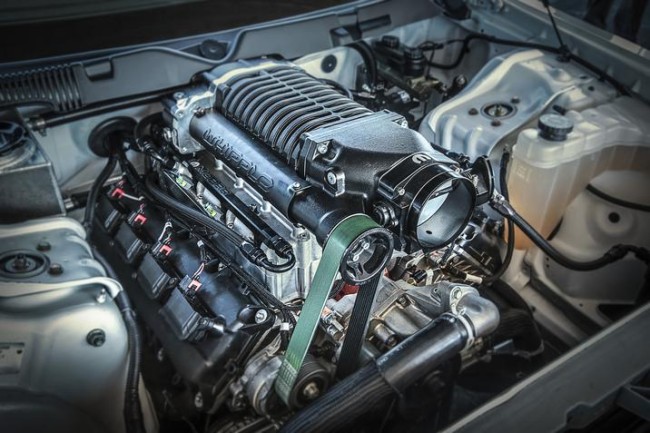 As an added touch of style and functionality, new 15-inch front and rear lightweight wheels include Mopar logo, wrapped in Hoosier drag radials – 28 by 4.5 inches in front and 30 by 9 inches wide in rear. New slotted front and rear brake rotors, with race-specific calipers and master cylinder bring these mean machines to a halt. A new, hinged hood and scoop and integrated trailer tie-down loops on the front and rear, are added touches as well.

“Today, we write the next page in our performance playbook with the reveal of the production Mopar Dodge Challenger Drag Pak, a vehicle that offers, for the first time, a supercharged engine that provides our racers more options,” said Pietro Gorlier, President and CEO — Mopar Brand Service, Parts and Customer Care, FCA. “Our brand is committed to supporting Mopar drivers who compete at all levels. In 2014, we debuted a new Dodge Dart NHRA Pro Stock car that won right out of the gate. In 2015, our new Dodge Charger R/T NHRA Funny Car did the same. Now, Mopar is supercharging our Sportsman racers.”

As per the release, “Development of the new Mopar Dodge Challenger Drag Pak has spanned nearly a year. A prototype was first revealed in 2014 at the 60th NHRA U.S. Nationals to elicit feedback from NHRA Sportsman racers on potential upgrades to make the Drag Pak even more competitive at the drag strip.” 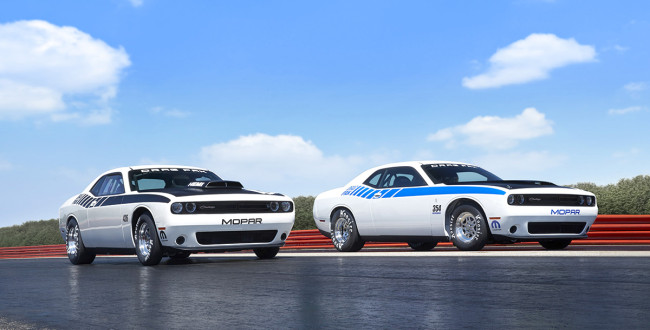 Of course, as all of us know, the Drag Pak’s roots are, as Mopar points out, “firmly planted in the early 1960s with the factory production of Max Wedge package cars.” Of course, the factory race car bar was elevated to stratospheric heights in 1968, with the insane 426 Hemi-powered Dodge Dart and Plymouth Barracuda Super Stock packages. Even today, those vehicles continue to dominate in the Super Stock/Automatic-Hemi (SS/AH) class of NHRA Sportsman racing and the annual Mopar Hemi Challenge, held during the NHRA US Nationals at Lucas Oil Raceway in Indianapolis, Indiana.

So when Mopar the first Challenger Drag Pak in 2008, the car was an immediate hit with racers. So much so, that 2009 had sold out of all 100 factory-built vehicles. The 2010 Mopar Dodge Challenger Drag Pak program offered racers a 6.4L (392ci) Hemi engine, and in 2011, a race-ready V10 car. Since then, the Drag Pak has racked up numerous NHRA National wins and records.

In fact, the 426 Drag Pak was also the first naturally aspirated car to make an eight-second quarter-mile pass at a NHRA national event. “During the 2014 season,” Mopar boats, “while celebrating the 50th anniversary of the Gen II Race Hemi, the 426 Drag Pak won a majority of the factory stock naturally aspirated class races and has posted national event class wins in recent years.” Clearly, this is something to celebrate in and of itself. 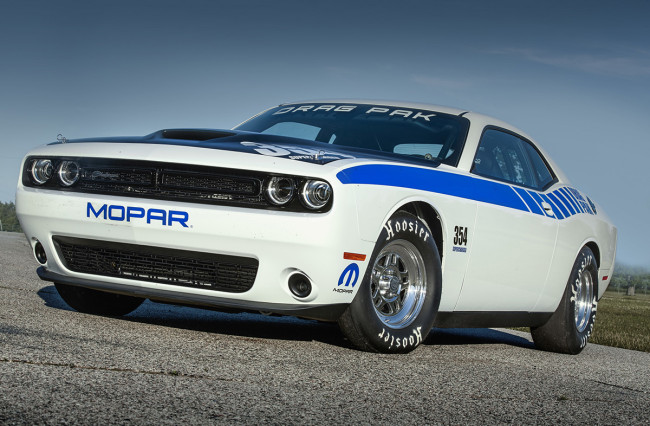 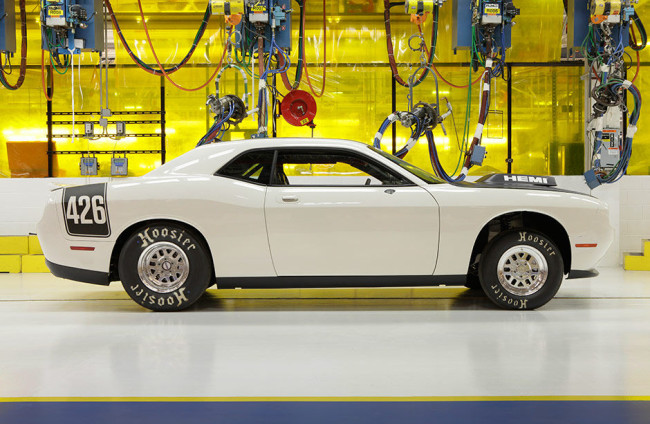 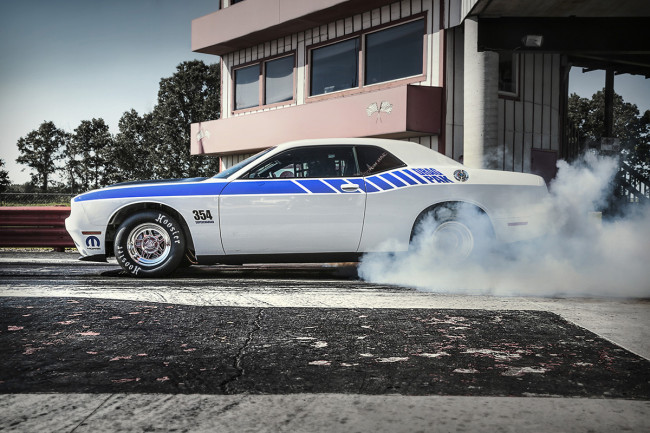 “We are extremely pleased with the results obtained during our testing,” said Dale Aldo, Mopar Motorsports Marketing Manager. “In the first runs the new Drag Pak ran consistently in the eights (eight second range) while improving times at the 60-ft. mark and also performing very well in the quarter mile. Once our customers get the car on the track, we feel it’s going to be a clear winner.”

The new Drag Paks will be available for ordering (through an authorized Dodge dealership) on July 23 – just in time for the Mopar Mile-High NHRA Nationals kickoff with the Mopar Block Party in downtown Golden, Colorado. Now, don’t think just because there’s no A/C or leather interior that you’re getting this for a song. Suggested retail price (MSRP) for the naturally aspirated 426 is a “cubic inch appropriate” $99,426, with the 354 supercharged version at a whopping $109,354 MSRP.