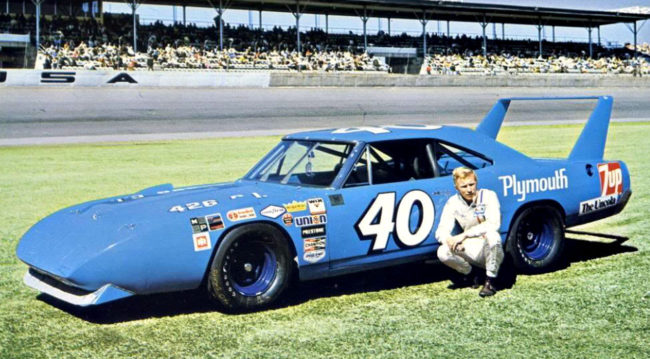 It’s with great sadness that we here at Mopar Connection Magazine share the unfortunate news that racing legend Pete Hamilton has passed away at the age of 74 on Tuesday, March 21st. Pete leaves behind not only family and friends in mourning but an incredible legacy of racing achievements that will forever leave a mark on the NASCAR community.

While Pete had a short career, only racing from 1968 until 1973 before retiring at age 30 due to neck injuries, the amount he accomplished in just that short time is absolutely spectacular. Pete was awarded Rookie of the Year in 1968 and during his five and a half year run in NASCAR, he brought home four wins and twenty-six top five finishes out of sixty-four races! Many Mopar fans will remember his winning of the 1970 Daytona 500 while behind the wheel of the legendary #40 Team Petty 1970 Plymouth Super Bird.

As news spread of his passing, various drivers and teams in the NASCAR communities shared their condolences and memories of Pete.

“I raced with Pete Hamilton in the Grand American series and a few late model races, he was a great guy and terrific race car driver, R.I.P”- Darrell Waltrip

“Pete was as fast as anyone on the superspeedways in 1970. We had support from Plymouth to run two Superbirds, and they connected us with Pete Hamilton. He was a good match for us, and we won three races together. I enjoyed being around him and will miss him.”- Maurice Petty

“It was great to have Pete as part of the team. He was a great teammate. We send our prayers to his family.”- Richard Petty

We are deeply saddened to hear of his passing and the massive loss to the NASCAR community and our thoughts and prayers go out to the Hamilton family and friends during this very difficult time.