The Science Behind Gear Splitting with Gear Vendors Under/Overdrive

One of the most attractive and easy-to-understand functions of a Gear Vendors Under/Overdrive is, of course, the overdrive. Get up to cruising speed in your vintage Mopar, let the overdrive engage, and listen to your engine RPM drop to the tune of a 0.78:1 ratio. Any gas-guzzling gear-head can grasp that instant improvement in long-term engine wear, cockpit noise, and fuel mileage.

Unfortunately, most mistake the overdrive function as the Gear Vendors unit’s for sole purpose for existence. While it does provide an overdrive in top gear, that overdrive can also be used in every other gear of the transmission. The process is called “gear splitting.” If you think of every gear as its own separate entity, gear splitting is basically the ability to put each one into overdrive. In fact, that’s where the Under/Overdrive trademark was created. “’Under/Overdrive’ is our explanation of how you make six gears out of three,” explains Rick Johnson, President and CEO of Gear Vendors. Above: You can see how the Gear Vendors Overdrive looks bolted to the back of the 727 transmission.

For example, the venerable 727 Torqueflite was born with a standard-for-the-day three gear ratios. A Gear Vendors Under/Overdrive (GV U/O) actually turns that into six separate ratios with first, first-overdrive, second, second-overdrive, third, and third-overdrive (or just overdrive). Using the GV unit’s 0.78:1 ratio “in between” each gear effectively shortens the jump between ratios and allows the engine to stay in a tighter RPM range. “This is how you got to where you are today with 6-speed, 7-speed, 8-speed, 9-speed, and 10-speed automatics. They all came from that idea,” states Rick.

Think about if second and third gear were missing from your four-speed; how would it feel to go from first to fourth? Chances are first gear would be a lot of fun before the massive RPM dump dogged out your motor in fourth. Those other gears are there to split the gaps while adding performance, driveability, and fuel efficiency. 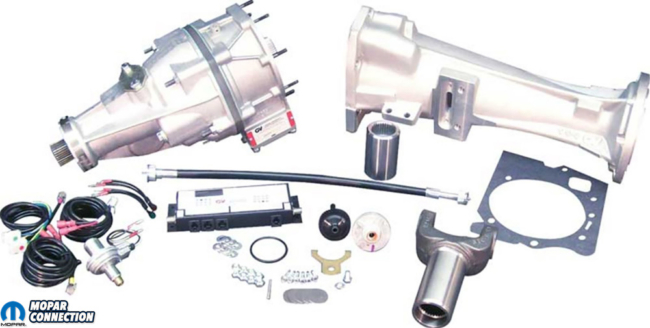 Stick Shift Splits
Let’s start with what gear splitting looks like behind the four-geared A833. Long regarded as one of the most bullet-proof stick shift boxes, an A833 is generally only replaced when an owner decides it’s time to go through the trouble and expense of an aftermarket 5-speed or 6-speed. But that should really never happen with a GV U/O available. “The Chrysler A833 4-speed is one of the best shifting, most durable transmissions built. We cringe whenever we hear someone switched one out to a lightweight late model 5-speed,” says GV. Aside from the hassle of requiring a new bellhousing, flywheel, clutch, shifter, and crossmember; an aftermarket transmission is missing one huge feature of a GV-equipped A833: gear splitting.

Furthermore, if you want to really pick up some meaningful stopwatch seconds, you can get tricky with the shift levers. “The hot setup in bracket racing is to flip the 3-4 side cover lever over so that third is where fourth is now and shift first, first-over, third, third-over, and do the entire quarter-mile with just one clutch depression. For most drivers, we are not talking tenths of improvement but a full second on the watch.”

Don’t forget about manual truck applications either. There’s a reason that most big rigs come equipped with double-digit ratios from the factory. Just like in drag racing, towing is best accomplished when the engine is able to stay at or near peak torque. The hugely popular NV4500 5-speed that transmits Cummins power in so many second-generation Dodge Rams can benefit from a GV U/O installation in a couple different ways. For one, everyone knows that fifth gear is the weak link. Over time, the nut that holds this gear in place on the mainshaft is known to loosen and then you are stuck with no 5th gear. Running loaded in fifth gear has been shown to be especially taxing on this design, so some max out hauling in fourth gear unless they’re hitting the interstate and fifth is a must. A GV U/O can save that fifth gear stress by allowing the NV4500 to run in fourth gear with the GV overdrive engaged for a final ratio of 0.78:1.

The ratio difference between fourth-over and fifth is only 0.04:1, so while achieving nearly the same final cruising RPM, the GV U/O allows a user to put all the strain of towing on the NV4500’s fourth gear, a much stronger gear than fifth. The positive effect on reliability of the package as a whole is unquestionable. Furthermore, when the truck is running unloaded, you can slip right in to fifth-over for a super deep 42% (0.58:1) final ratio and purr right along.

Gear splitting an NV4500 can also have a tremendous effect on the feel of an engine’s power without actually making any engine modifications. Stock 5.9L Cummins engines all make peak torque in the 1,400 to 1,600 RPM range depending on year. As an example, the factory gear ratio step from third to fourth is 1.67:1 to 1.00:1. This equates to a 40% drop in engine RPM between those two gears. Shifting just above peak torque at 1,900 RPM wouldn’t make much sense because engine RPM would drop all the way down to 1,140 RPM in fourth, which is below peak torque and well into lugging range.

Adding the GV U/O allows that step to be made via third, third-over, then fourth. The ratio step from third to third-over is just 1.67:1 to 1.30:1, equating to an RPM drop of only 22%. Shifting at the same 1,900 RPM as in the previous example, the resulting RPM in third-over would be 1,482 RPM. As a result, the engine is able to stay in very close proximity to peak torque and fuel mileage through the use of gear splitting. Axing an Apathetic Automatic
Gear splitting has the same basic concept with an automatic transmission. By using the overdrive in each gear, a three-speed 727 functionally turns into a six-speed box. While many might think that switching to a four-speed automatic like a 518 or 4L60E is an upgrade from the time-tested 727, this isn’t actually the case when considering a GV U/O. Yes, the modern four-speed will tack on an overdrive ratio at the end, but it doesn’t have the ability out of the box to split the gaps between first/second and second/third. Something like a 518 would only add drivability at cruising speed; installing a GV U/O does that while also adding seat-of-the-pants acceleration feel with gear splitting, keeping the engine in a more narrow RPM window.

Think about the 840-horsepower Dodge Demon; there’s a reason it’s so fast with the 8HP90 eight-speed automatic. With such tight ratio spacing, the Demon is able to stay near maximum torque production at all times. None of the gear steps are so drastic that they cause a lug. Rather, each gear feels like another rocket blast of power. Once the 8HP90 is through its two lower “granny” gears, the highest percentage drop between gears is a manageable 23%. A 727 with a GV U/O is very similar, as the highest percentage drop being 24%. Add in the fact that a rebuild kit for a 727 is cheaper than a fluid change in an 8HP70 or 8HP90, it’s easy to see why a GV-equipped 727 makes the most sense behind a modern Hemi swap.

First-over can also help make sure you don’t hook right into a tree when it comes time for a big smokey burnout. “You’ll see guys doing burnouts and then you’ll hear it shift because they’ll use it drive out of their burnout. If you go first to first-over, you can drive out of your burnout with no big event of you slamming your head against the side glass and shoulder against the door. “That’s what happens when you go to second gear; the tires just hook up right now and wham,” Rick explains.

Without a GV U/O, the RPM drop from first to second is so large that some cars don’t have enough power to keep the wheels spinning in second. This is exactly what you see in the hundreds of homemade videos where someone is showing off, then hooks hard into an embankment, another car, or a ditch. The GV U/O could have potentially saved them some embarrassment with first-over providing enough torque multiplication to ease the transition.

Seat-of-the-pants feel is also hugely different when using first-over. In a car with 3.55 gearing, first-over will feel just like a car with 4.56 gears would in second. The drive ratio and, therefore, torque multiplication in each respective case is almost the same. Doing the math, 3.55 (differential ratio) x 1.91 (first-over ratio) = 6.78. Similarly, 4.56 (differential ratio) x 1.45 (second ratio) = 6.61. From an acceleration standpoint, both are going to feel about the same with the 3.55-geared car actually having a slight edge in torque multiplication. Plus, from a fuel mileage standpoint, the coupling of the more modest 3.55 rear gear and an overdrive are going to vastly outperform the 4.56s from every angle.

Either way, the best method for using first-over is the AutoLaunch feature. With AutoLaunch activated, the GV’s electronics will automatically initiate solenoid engagement at 20 mph. Whether racing or showing off on the street, this allows the driver to completely focus on keeping the car on the straight and narrow while GV controls handle the first to first-over shift.

Passing gear is another consideration. Kicking down a 727 to second gear at passing speed results in a 45% RPM increase. If your Mopar runs around 3,000 RPM at 55 MPH like many do, this means it’s about to scream up to 4,000+ RPM in a kickdown situation. Second gear is just too low to be used efficiently for passing. With the GV U/O engaged at cruising speed, passing will initiate a kickdown into second-over, a 28.6% faster gear than second. With more top-end RPM available in second-over, it’s a much more useful passing gear than second alone, especially if you need to get around someone in a hurry. Any way you slice it, a Gear Vendors Under/Overdrive is going to add driveability, fun, and value to a muscle car. Look at their resale value; it’s not uncommon to see older GV units selling for close to the same price they were when new. We even ran across a 440/727 package over at Cleveland Power and Performance that was GV-equipped and listed for almost $10,000. No doubt, a good chunk of that value was because people know what a Gear Vendors unit adds to a drivetrain and are willing to pay a premium price for a premium product.

While adding an aluminum intake manifold or different camshaft might make you think and hope performance is improved, the simple touch of a button makes it readily obvious that a Gear Vendors Under/Overdrive has instantly and drastically changed a vehicle for the better. Tires barking in first-over, trucks towing at peak torque, and the sound of settling into a deep overdrive at interstate speed are all things of which we need a whole lot more. Get over the shortcomings of decades-old transmission technology by getting under your car and installing a Gear Vendors Under/Overdrive.