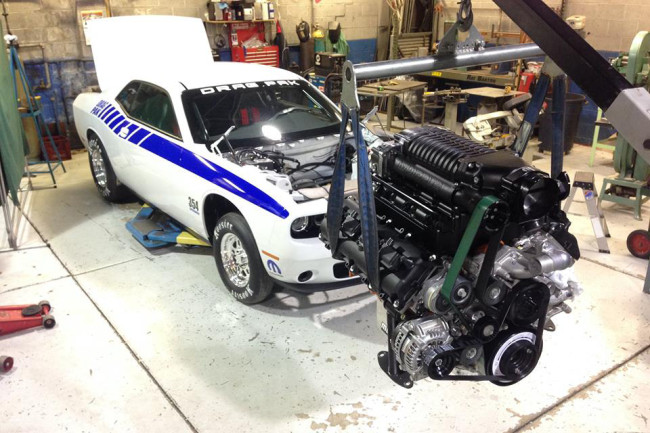 In early December 2015, Chip Hoynitski’s 2015 Drag Pak Challenger rolled into Ray Barton’s shop in Robesonia, Pennsylvania with one goal in mind: strip the Challenger down and upgrade whatever was needed to be competitive in the NHRA Factory Showdown Series.

This particular Challenger came from the factory with the 354 race-prepped Gen III Hemi configuration and features a Whipple supercharger and Big Stuff engine management system. Upon arrival at Ray’s shop, he yanked the engine from the car and hooked it up to their in-house dyno. Fresh out of the car as equipped from the factory, the engine pumped out a whopping 1,054 horsepower at 7,500 rpm! 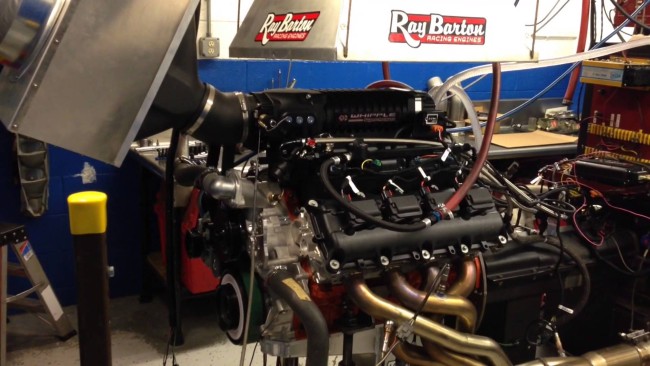 From there, the tweaking began. Adding timing and leaning out the air-fuel mixture in the car’s software system gave the engine a gain of 56 horsepower at 7,500 rpm. Peak power output was 1,113 horsepower at 8,000 RPM and 849 ft-lbs of torque! Once they had a solid base-line to work from, the engine was stripped down and the real work began.

The team bored the block .060 over and added different pistons and valves among some other modifications they don’t want to share to keep the competition guessing. The compression ratio for the 354 was around 12.5:1 from the factory. Since the car will be running in the stock class, no adjustments were made with that.

“Basically we’re blueprinting the engine and taking everything to the max, within the legal limits; but you push everything as far as you can push it. In the stock class, you’re not allowed to change any of that stuff. They CC the piston and the block. They CC the chambers and all that stuff so you’re not allowed to modify anything like that. But just going .060 over is like another ten cubes so that should be 30 horse in itself,” says Ray.

The process takes time to make sure everything is legal for the stock class. “I’m waiting to have my pistons approved by NHRA. We get our own pistons made. I don’t use the stuff that comes in the motor. You have to get a piston made, then you have to submit it to NHRA, and have it approved, and then they put it on their approved list. Then anybody that’s running that combination can either buy the piston from you or go through the same process that I’m going through. That process alone takes about one month to complete.”

The chassis is also going through some changes while they are waiting on the piston package to be approved. “To go quicker than 8.50, the roll cage has to be certified for 7.50. So that required a whole new roll cage with a funny car cage in it,” Barton explains. Jonathan Allegrucci will be aiming the Mopar rocket down the quarter-mile in the stock and super stock divisions.