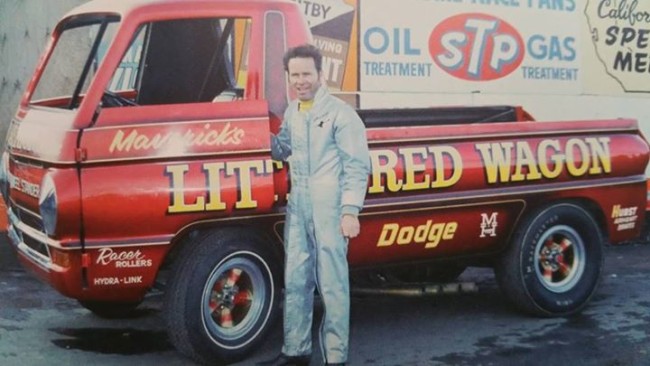 It is with a heavy heart that we write those words. Another Mopar icon from a bygone era has left this earth. Bill “Maverick” Golden piloted the Little Red Wagon wheel-standing Dodge Pick Up to thousands and thousands of crowd-pleasing wheelies. All across America, Maverick’s Little Red Wagon delighted drag-strip patrons by lifting its wheels at speed thanks to a Nitro Hemi tucked out back.

But the Original Wheelstander, as he came to call himself, was more than some showboat PR stunt. Golden was an honest-to-goodness Super Stock Champion, defeating Dyno Don Nicholson’s factory 409 Chevy in ’62. Ma Mopar gave Golden the keys to one of their new 1962 Super Stock Dodge package cars with the 413 Max Wedge and he used it to become the AHRA WinterNationals S/S Champion. It was the first automatic Mopar to win any Super Stock Championship. 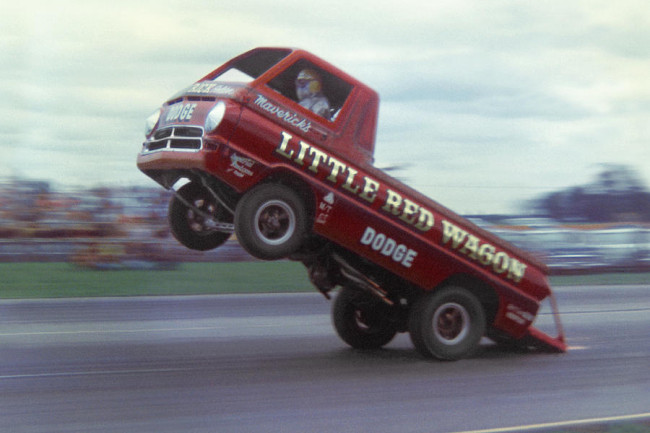 You see, Golden was also a backyard engineer and he and a friend figured out how to change spring weights in the Chrysler Torqueflite for higher upshifts. Nobody paid any attention, really, to automatics on the drag-strip before Golden’s tweaks. He passed on what he found out – during an all-night test and tune – to the folks back at Chrysler Racing. The dual legends of the Torqueflite and Bill “Maverick” Golden were born. And the rest is history.

Our condolences go out to Bill Golden’s family and to all Mopar fans today. He spent so many drag strip moments looking up to heaven during his career from behind the wheel of  The Little Red Wagon, we know he’s there now. Godspeed Bill.