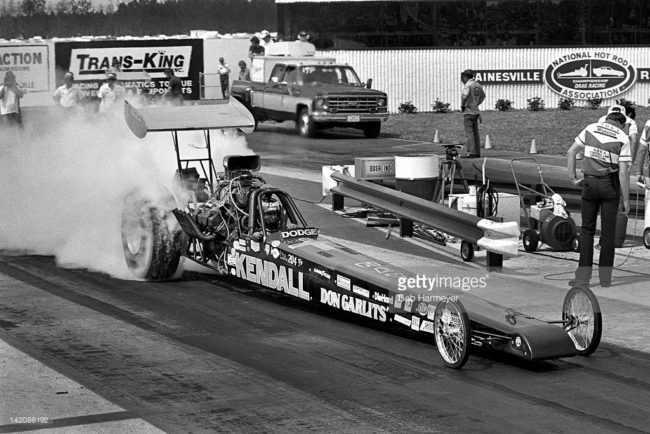 Has there ever been a time that you were blinded by a fog of tire smoke and had to cover your ears from the sound of 11,000hp? If so you have probably been to a NHRA race. The season kicked off earlier this month at Auto Club Raceway at Pomona in Southern California. As the NHRA got underway so did Mopar’s yearlong 80th anniversary party. On August 1, 1937 the name Mopar appeared on a line of antifreeze products. Since then Mopar has turned into total service, parts and customer care of all FCA vehicles around the globe. Not only supporting factory vehicles but also aftermarket parts and many divisions of racing.

Not only will this year hopefully bring top spots to NHRA Mopar drivers, but Mopar and Dodge have teamed up to bring enthusiasts all new display trailers to the Manufacturers Midway at 15 of the 24 stops on the national event calendar. The party is going to be at full force with special events such as driver autograph signings and a up close look at the latest products from Dodge and Mopar.

At the core of the Mopar celebration will be racing, which had a catapulting effect for Mopar in the 1950s. As Mopar teamed with Don Garlits in the early 1950s, he was able to break numerous speed and performance barriers in HEMI-powered vehicles over the next several decades. During this time Mopar became an establish name in racing and since then have not quit. Fast-forward to last years NHRA season and Mopar driver Ron Capps grabbed the NHRA Funny Car World Championship. He will be defending his title again this year along with many other Mopar racers looking for top spots this year. 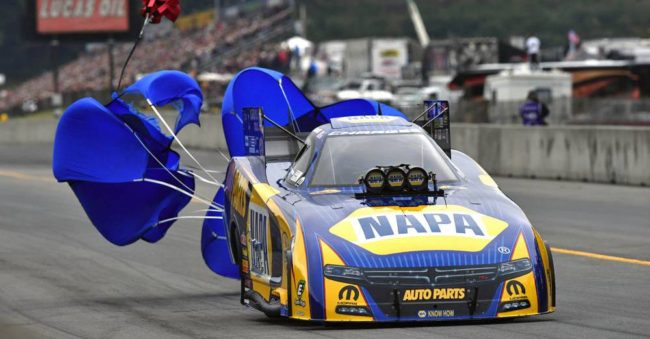 You can read about all the details of this years Mopar celebration and NHRA racers here:
When the fastest race cars on the planet roar to life this week for the NHRA Winternationals, a fleet of Mopar-powered Dodge machines will be among the front-runners at Auto Club Raceway at Pomona in Southern California. Drivers and teams will also continue the yearlong Mopar 80th anniversary celebration at the 2017 season-starter as they look to add to the brand’s rich drag racing tradition.

The stout, four-driver NHRA Funny Car stable at Don Schumacher Racing (DSR) will look to mark the brand’s 80 years by capturing a fifth NHRA Mello Yello Series title in the past seven seasons. Longtime Mopar-powered DSR driver Ron Capps gained the title of World Champion for the first time in 2016. His championship run began in Pomona where he collected the victory in the first event of the season. Capps went on to win a total of five races in 10 finals appearances and will return to defend his crown in the NAPA Auto Parts Dodge Charger R/T.

Meanwhile, 2011 and 2014 Funny Car Champion Matt Hagan seeks to dethrone teammate Capps. Hagan finished third in his Mopar Express Lane Dodge Charger R/T in the Funny Car points standings last season, collecting four wins along the way, and also set dual national records. Hagan was responsible for the lowest E.T. in Funny Car history by turning in a time of 3.822 seconds at Minnesota’s Brainerd International Raceway in August. He also set the record for speed, reaching a staggering 335.57 mph at Heartland Park Topeka in May.

Just as much a threat for race wins and world titles are 2012 champ Jack Beckman and 2016 championship runner-up Tommy Johnson Jr., in the Infinite Hero and Make-A-Wish Dodge Charger R/T machines, respectively. Beckman won twice in 2016 and is also second in lowest E.T., having turned in a pass of 3.825 seconds during last season’s fall Pomona event. Johnson earned three event wins last year, including at the Pomona season finale.

In the Top Fuel class, Leah Pritchett will compete in her first full season with DSR after coming onboard with the team midway through the 2016 campaign. A winner last year at Wild Horse Pass Motorsports Park near Phoenix and a top-ten finisher in the standings, Pritchett proved she’s ready to build on that solid season as she battles in her Mopar/Pennzoil Top Fuel Dragster. During Nitro Spring Training in Phoenix on Saturday, Pritchett recorded the unofficial quickest elapsed time in drag racing history, clocking a run of 3.654 seconds at 331.85 mph.

Pritchett will compete alongside one of the most successful Top Fuel drivers in history, eight-time champion Tony Schumacher, as he pilots the Mopar-powered U.S. Army Top Fuel Dragster.

In 2017, Mopar and Dodge are also putting extra emphasis on Sportsman racing with a new program designed to provide incentives to Mopar Dodge Challenger Drag Pak racers. The Magneti Marelli Offered by Mopar Drag Pak Rewards program will offer monetary incentives to racers running that particular car and package. The Top 20 drivers in the final point standings will be eligible for cash prizes, while rewards are also available for a Factory Stock Showdown win and a Stock Eliminator World Championship.

All Mopar Sportsman racers will continue to be eligible for awards under the Mopar contingency program, while a variety of special events are scheduled for Sportsman racers through the year. FCA US LLC engineers will provide on-site support to Mopar and Dodge racers across all Sportsman divisions during each of the 24 national events as well.

Mopar and Dodge on Manufacturers Midway
The Mopar display trailer will be on hand on Manufacturers Midway at 15 of the 24 stops on the national event calendar, offering fans a view of the latest Mopar products and hosting special events, such as driver autograph signings. The first signing event is slated for 11:30 a.m. PT on Saturday, February 11, in Pomona.

A brand-new Dodge exhibit will also join the Mopar rig at each event, with the full-scale Dodge display to debut at the NHRA Gatornationals in March. The brands will also serve as primary sponsors at two events on the NHRA schedule: the Mopar Mile-High NHRA Nationals, set for July 21-23 near Denver, Colorado, and the Dodge NHRA Nationals, scheduled for September 21-24 in Reading, Pennsylvania.

For more information on Mopar and Dodge in NHRA, check out the Mopar brand’s official blog, http://blog.mopar.com/.