On September 15th 1997, Chris Giardina’s new “child” arrived. The Staten Island, New York resident was new to the Mopar hobby at the time, so he really didn’t know what to look for as far as numbers matching, rare options or even 1-of-whatever built. All he saw was his childhood dream car from when he was growing up as a kid watching “The Dukes of Hazzard.” This child was special though; a factory 1969 Dodge Charger R/T.

When Chris’ Charger arrived, most of the bodywork was done and in primer. Unfortunately, primer hides a lot as he discoverd out. The previous owner did the majority of the bodywork installing a new driver’s side quarter as well as a new trunk floor and trunk extensions. The rear lower valance was also replaced. The engine compartment, door jambs and trunk were already “edged out” in what DuPont calls “Spectramaster Red.” This color is actually a bright orange and Chris says he fell in love with it right away.

In August 1998, Chris dove into the Charger project head first and sent the car to Dominick Gigante, owner of Mola Auto Collision in Staten Island, NY. Dominick did the finishing body work the car required and then sprayed the Charger in the same DuPont “Spectramaster Red” urethane enamel base coat/clear coat paint that Chris had previously fallen in love with. While it was at the body shop, Tom of Reliant Auto Tops installed the new Legendary Interiors’ black vinyl top. 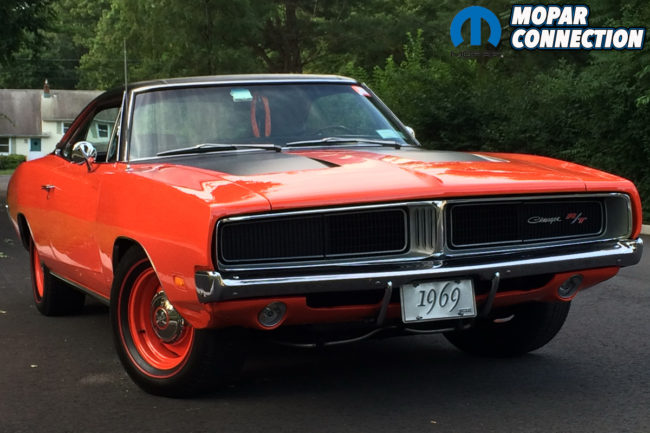 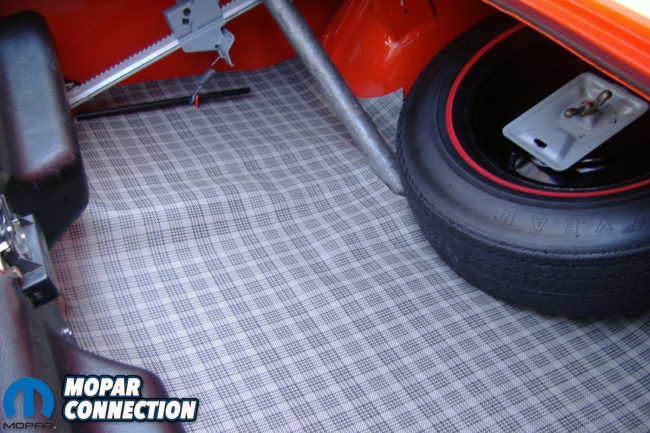 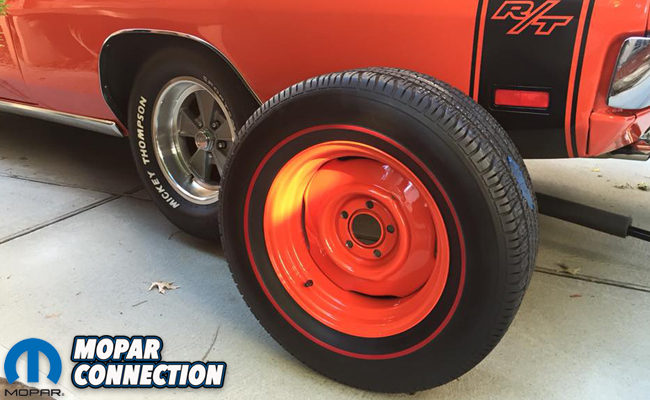 In late September that year, Chris got the car back from the body shop and didn’t waste any time putting it back together. When first purchased, the majority of the car was in boxes as mostly everything had been taken apart in one way or another by the previous owner. Thankfully enough, the parts were labeled fairly well. By that November, Chris had the car back together and was driving it!

One continuous headache for Chris was the addition of the R/T stripe. Originally, his car was coded V88 which is “tape stripe delete.” Instead of a stripe, it came with two large R/T emblems on the rear of the quarters. Chris loved the look of the R/T stripe so he took the Charger to a shop to have one put on. Actually, he went to two shops. Neither shop could get the stripe on right. One place actually ripped the stripe putting it on so they bought him a new one. The next shop got it on but they put it on too far forward.

Finally, the old adage applied – “If you want something done right, do it yourself” – so Chris did and couldn’t be happier. He also installed the M25 option lower rocker moldings as well as hood turn signal indicators from Charger Specialties. Originally, Chris installed 440 “engine call-outs” on the hood (a 1970 Charger option). About a year ago, he decided to remove the call-outs and go down a different path: Chris always had his eye on the factory V21 “Hood Performance Treatment” blackout option which was available for the 1969 Chargers. With the help of his good friend Bill Mann, they painstakingly masked off the hood and cowl panel before painting the V21 option on the car! Shortly after, he added hood pins to top it off. 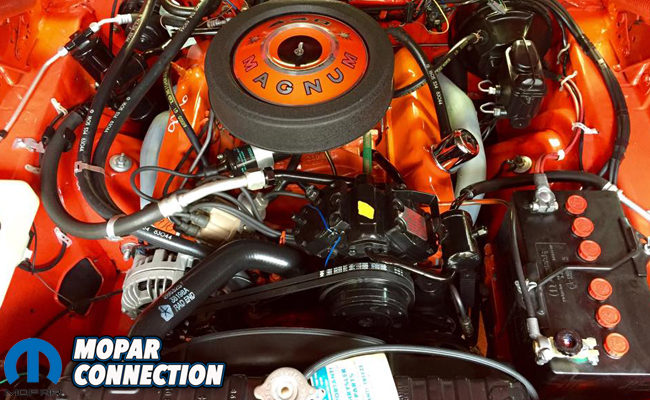 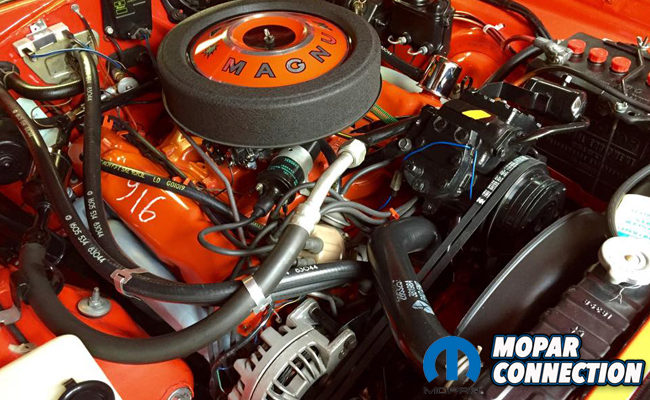 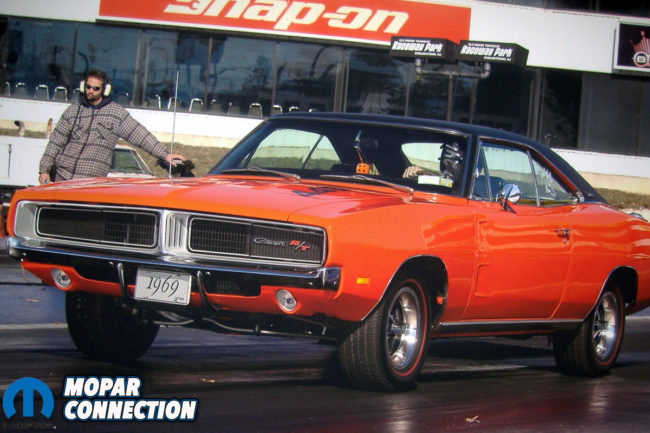 The front seats needed massive help so Chris recovered them himself using new covers and “buns” from Legendary Interiors. The rear seat is the original and in great shape. He installed new carpet and custom logo floor mats from ACC. The headliner is also the original. The dash pad in the car had a crack in it so he got a good used one that was green in color and dyed it black using SEM Satin Black vinyl paint. Chris says since the only number’s matching thing about the car is that it’s a real R/T, he decided to add more options that he would have ordered had he have purchased one new in 1969.

Of which, Chris added a wood grain sport wheel. The wheel itself has an interesting story behind it. If you are a 1968-1970 B-body fan, you know how hard to it is to find a good, crack-free wheel. One day, Chris answered an ad on Moparts.org from a man out in Utah selling a “nice wood grain wheel.” The seller said he had bought a trailer with twelve Driver’s Ed simulators from the 1970’s. The simulators had Dodge steering columns, accelerator pedals and a small speedometer. They all had the sport-type wood grain wheels on them in varying conditions. He was asking $150 for the wheel so Chris sent him a money order and ten days later, he got a box. When he opened it, his jaw hit the floor! Not only was it crack free but it still had “wood grain” that you could still feel! Most forty-year-old wheels are worn smooth. He was ecstatic to say the least.

While adding options to the car, Chris also decided to add a rear window defroster and a Tic-Toc-Tach that he rebuilt himself while redoing the factory gauges with a decal kit from Performance Car Graphics. The final option he added was a 6-way adjustable driver’s side seat. While Chris says it’s pretty much a useless option (you just set it and forget about it), it really improved his overall seating position in the car which really helps for those long road trips. 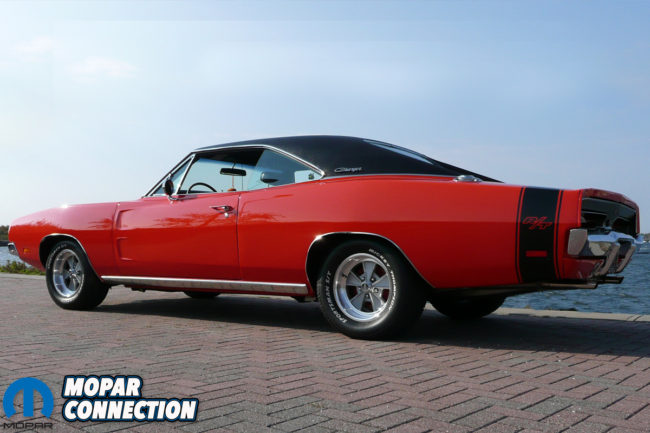 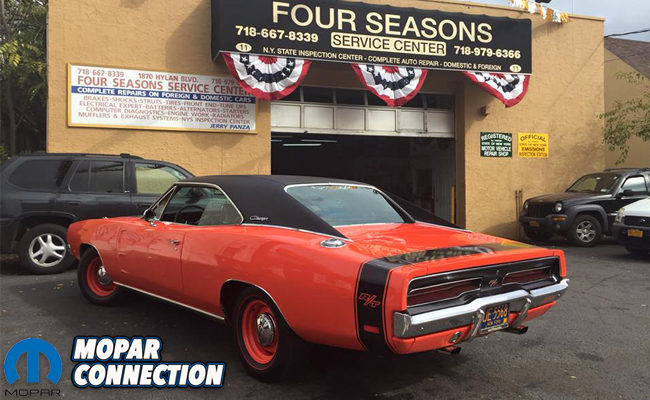 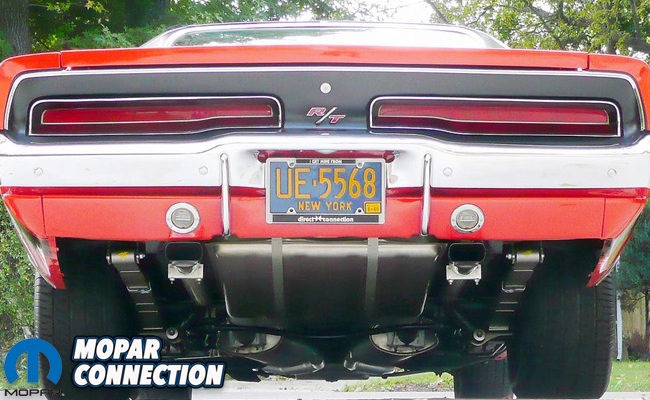 Under the hood is a beautifully-detailed 440 that Chris rebuilt in 2004. The engine itself is a 1973 block bored .030″ over with a steel crank and stock LY rods. He used Speed Pro forged 2266 pistons, which combined with the closed chambered 915 heads, produces approximately 9.5:1 compression. The cam was ground by Engle Cams at 108′ centerline for a nice lope at idle. It has 224′ duration at .050 with a lift of .504. Aside from the machine shop work, the engine was fully assembled by Chris. On top, he’s running a stock 440 intake paired with an Edelbrock 800 AVS carburetor. He also updated the charging system to a 1970’s vintage dual field alternator and upgraded the ignition using a Mopar Performance electronic kit. Using Desktop Dyno, the estimated HP is 425 @ 5500 rpm with 500 ft-lbs torque @ 4300 rpm.

The exhaust system consists of Jet-Hot coated factory HP manifolds that mate to a factory 2.5″ H-pipe. From there it goes to 2.5-inch Hemi replacement mufflers from Accurate LTD, to 2.5-inch tail pipes from Flowmaster. Capping the exhaust off is a set of custom Stainless Steel 2.5-inch Charger chrome tips from Mancini Racing to keep the correct factory look. The fuel system consists of a new reproduction gas tank with factory 3/8-inch main fuel line with 1/4-inch return lines. From the tank, the fuel goes to a Carter high volume pump into a stock factory big block vapor separator and into a 5/16-inch line to a Fabulous Fabrications fuel line that mates to the carburetor.

To top off the engine bay detailing, Chris went for a brand new molded hood pad, date coded cooling hoses and tags and a new reproduction battery with correct appearing battery cables. All the wiring in the Charger was fully upgraded by Bill Evans Wiring. Chris also reinstalled the factory, one year only A/C set up that came original to the car. 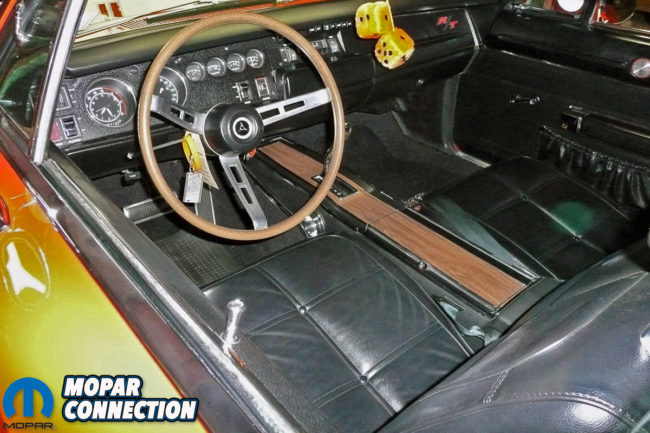 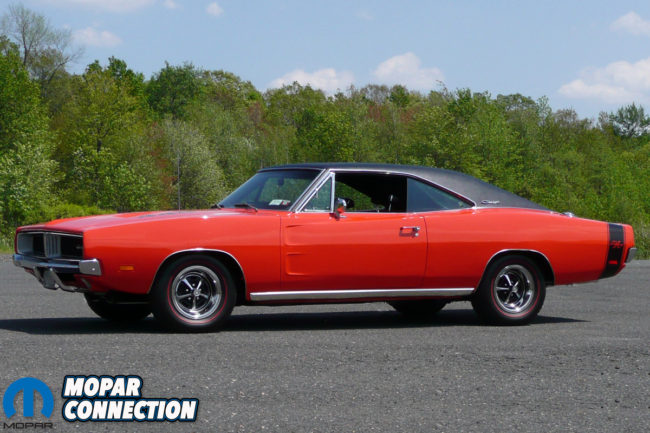 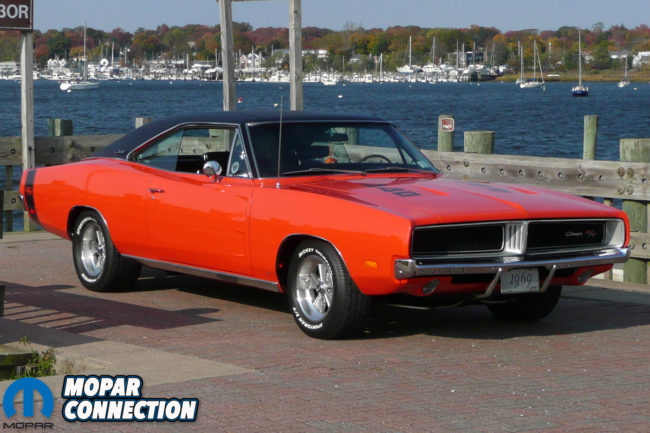 The transmission is a HD 727 Torqueflite as originally equipped. Chris fully rebuilt it himself using Kevlar clutches and bands. He installed a Turbo Action Cheetah Manual Reverse as well as a Mopar Performance deep pan with a transmission cooler. The torque converter is a TCI 2800 RPM 11-inch unit. The rear end is an 8.75 with a 489 case fitted with 3.55 gears and a cone type Sure-Grip. Chris also rebuilt this unit himself!

Upfront, the Charger’s front suspension was rebuilt using Polygraphite bushings and Moog components with a kit from Performance Suspension Components. The stock 11/16-inch diameter sway bar was retained as was the stock HD .092-inch torsion bars. On all four corners, KYB Gas Adjust shocks were used. Out back, the rear springs are new factory replacement bias leaf springs. This helped plant the massive torque of the Big Block to the pavement. The springs were purchased from ESPO Springs and Things along with new U-bolts and nuts. Chris also installed a manual front disc brake kit from Stainless Steel Brakes Company. He says it’s really easy to do and a great, complete kit.

To top everything off, he’s currently running a set of body colored steel wheels with factory dog dish caps wrapped in 255/60/15 Radial Redlines from Diamondback Classics. When he decides he wants to change it up, he switches those for a set of Cragar Eliminator 500’s for that “Day 2” look! Chris’ Charger is solid proof that with a bit of knowledge and determination, you can do most, if not all of your own work on your restoration project! With all the work Chris has put into his Charger, it’s no surprise it’s a constant award winner at the Chryslers at Carlisle show! He even had Robin McQueen over at Automolove.ca design an awesome banner of the car which proudly hangs on the wall next to it! 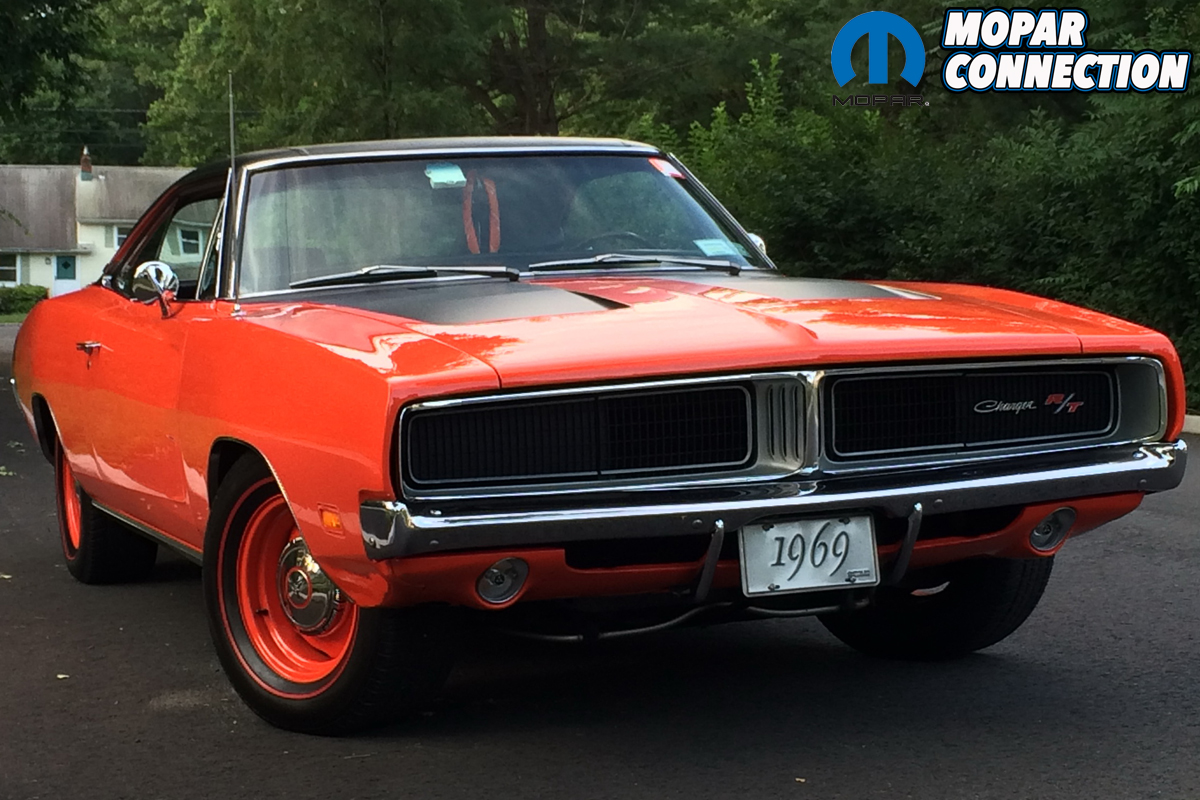 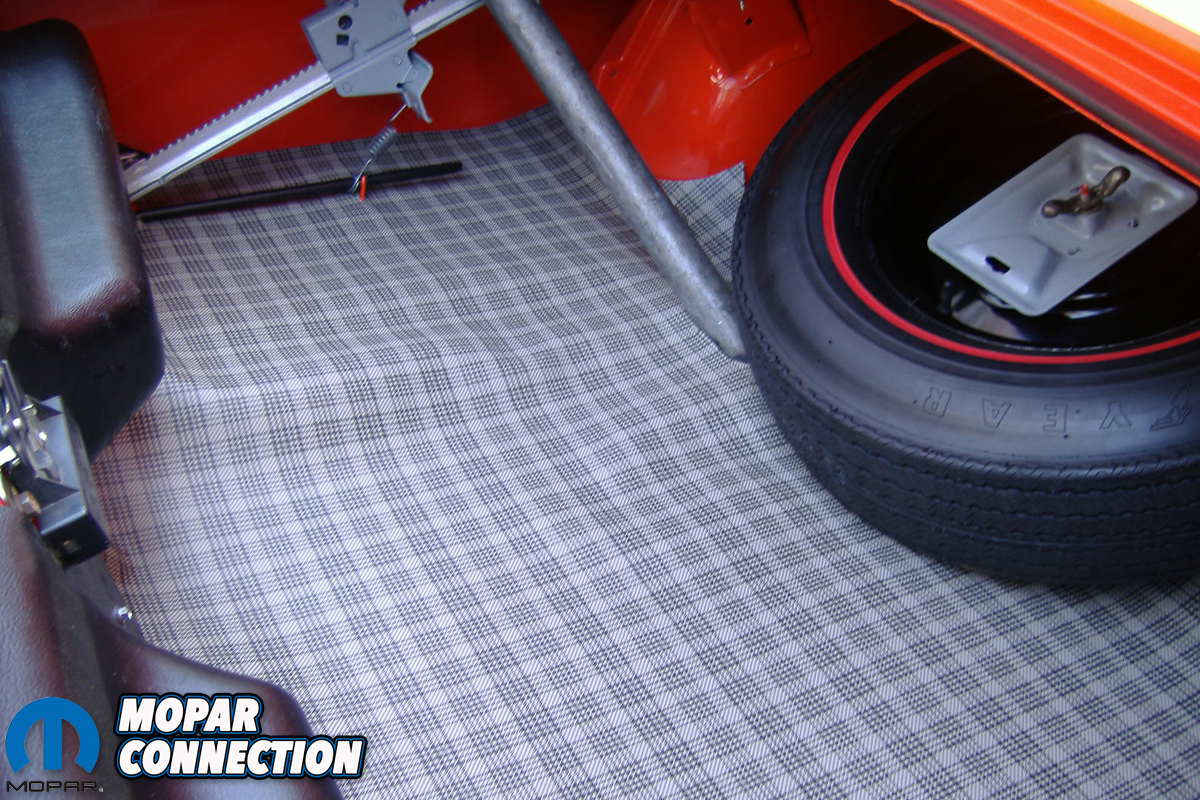 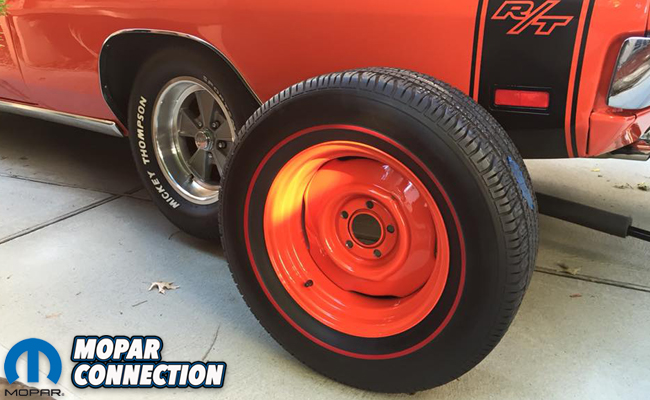 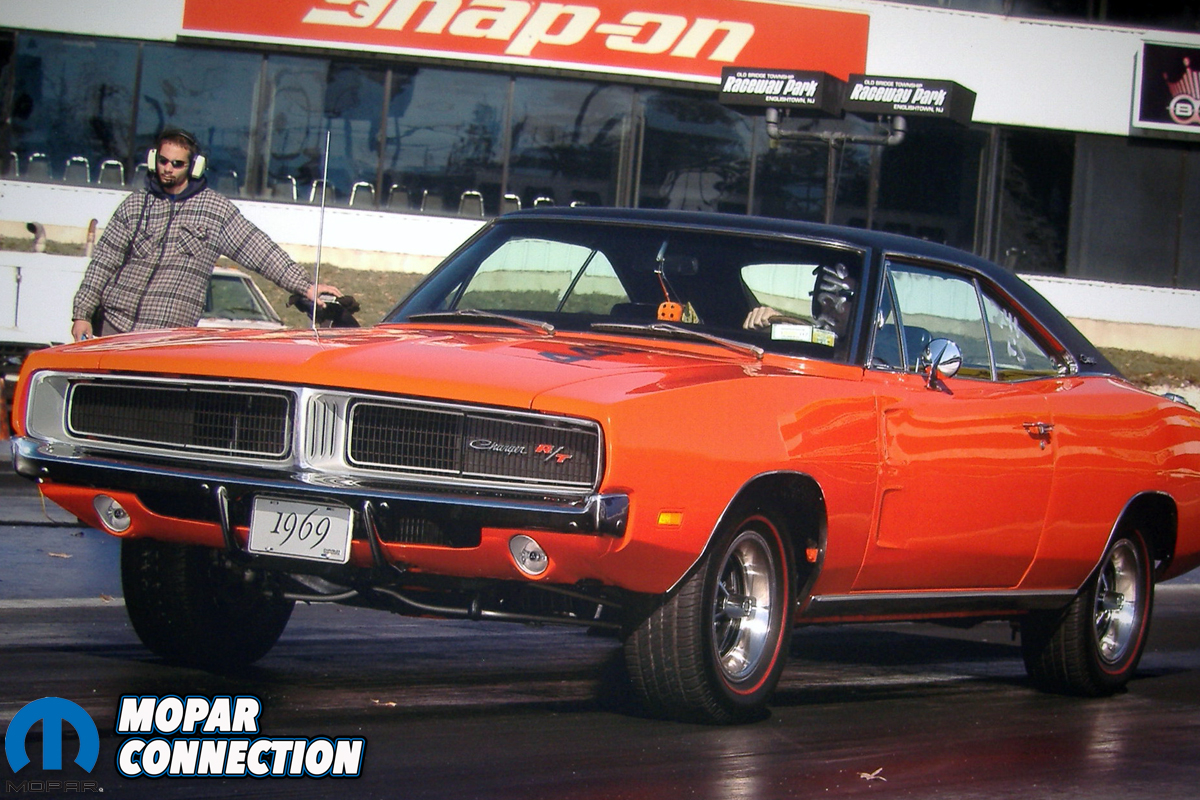 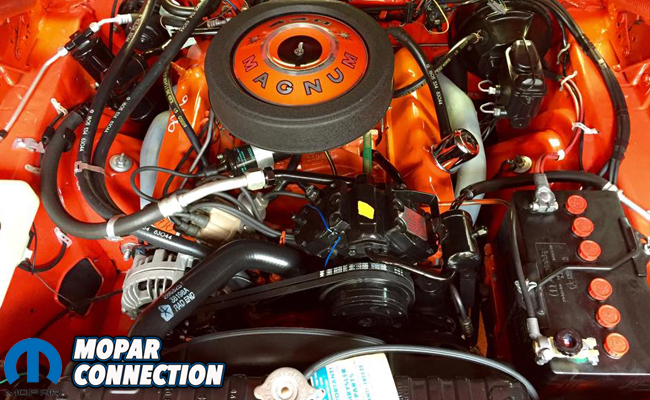 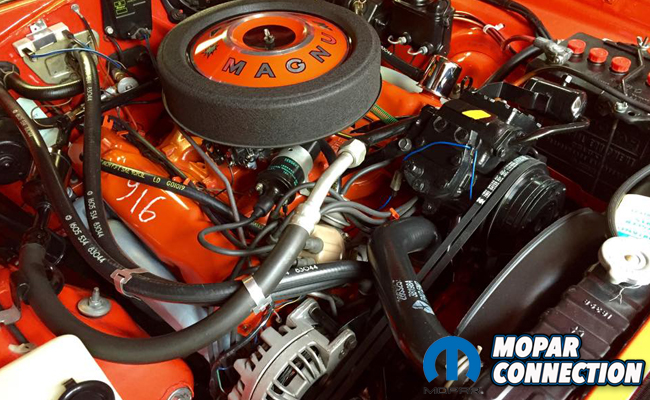 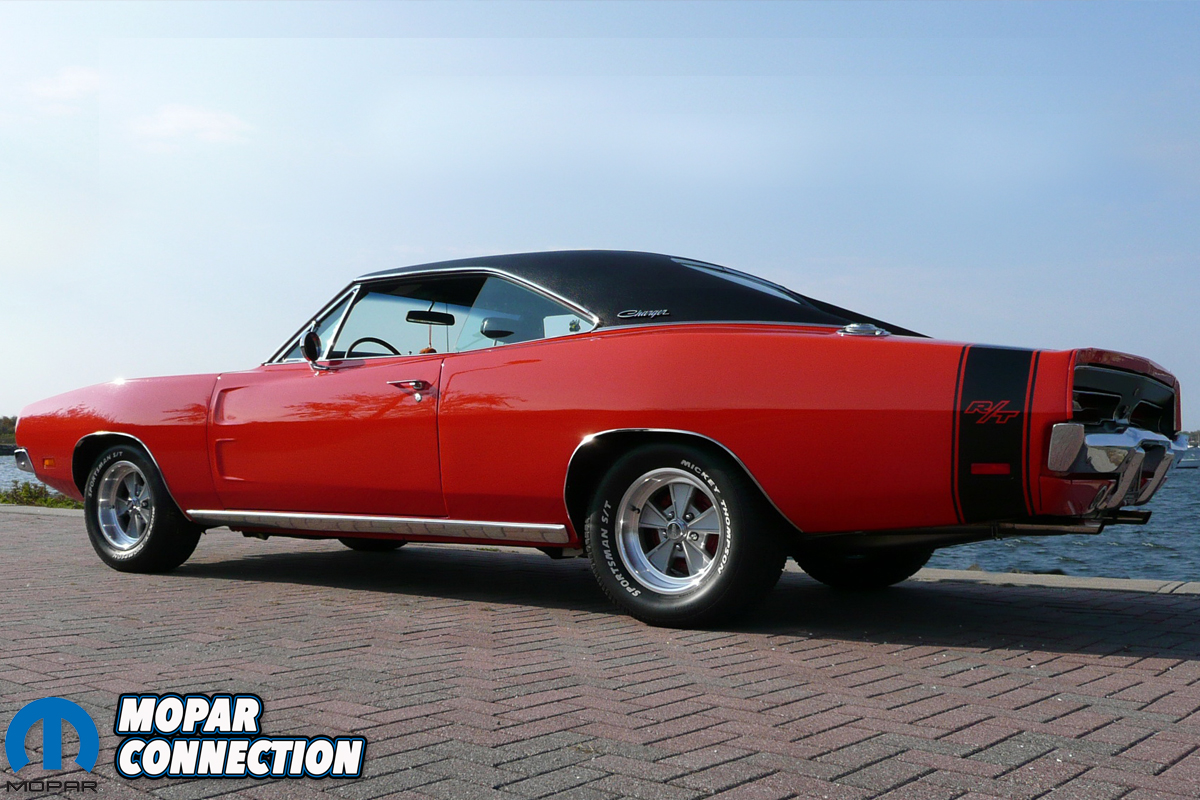 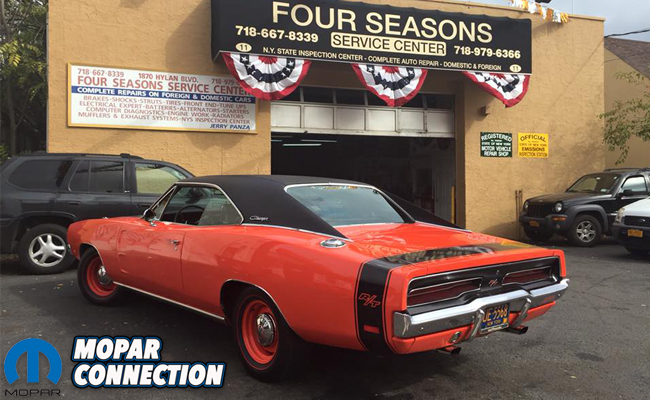 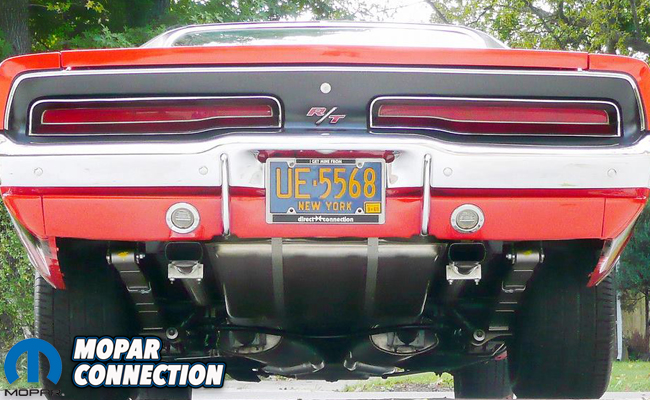 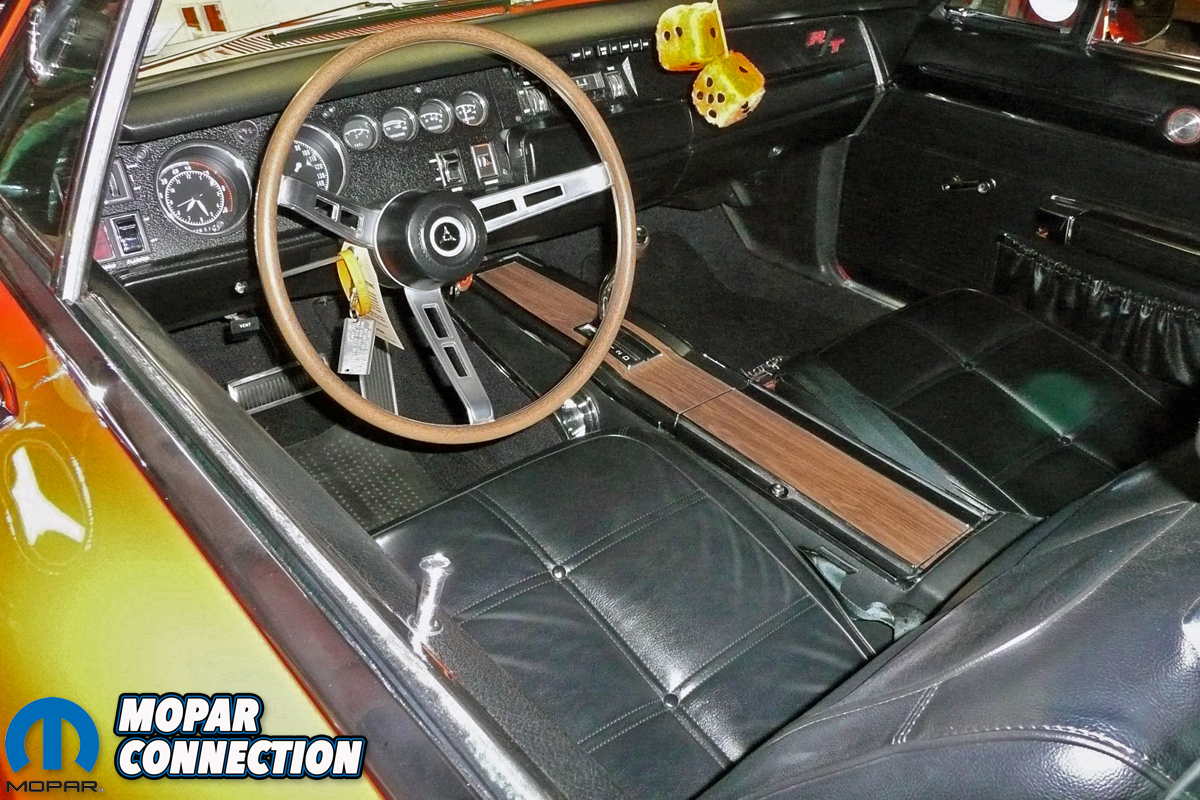 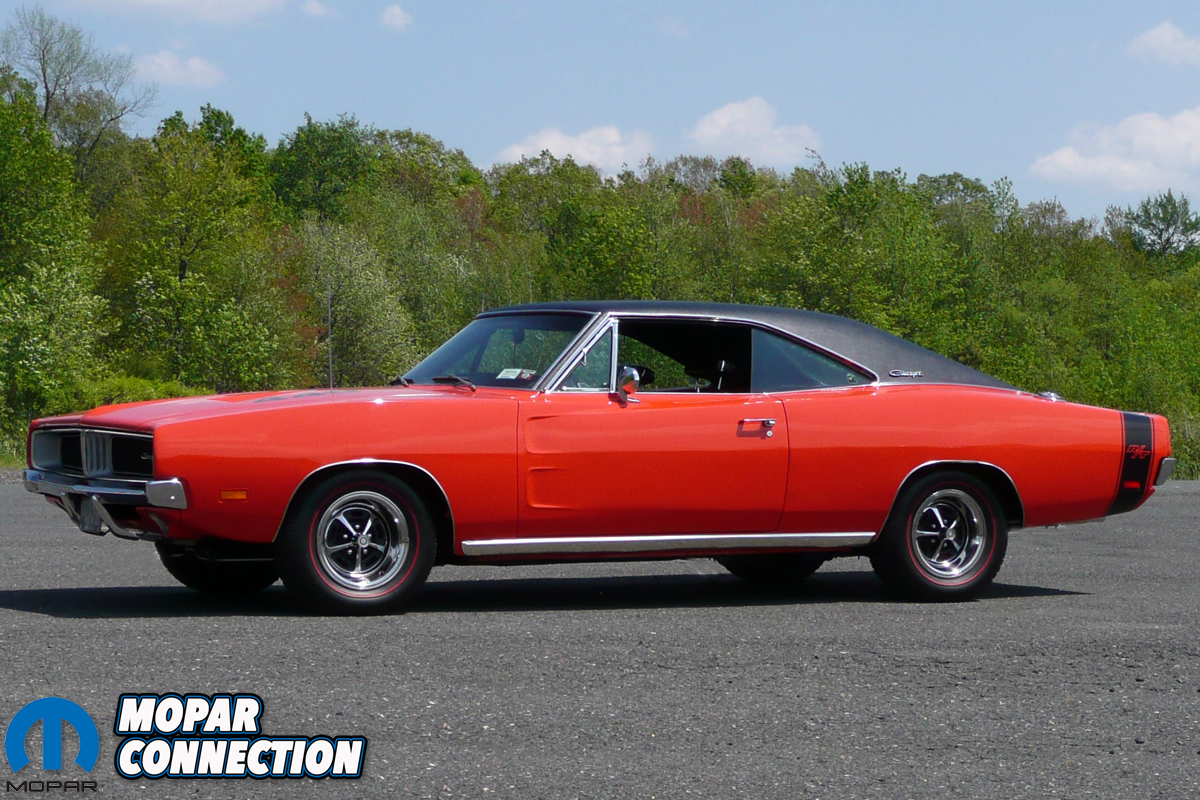 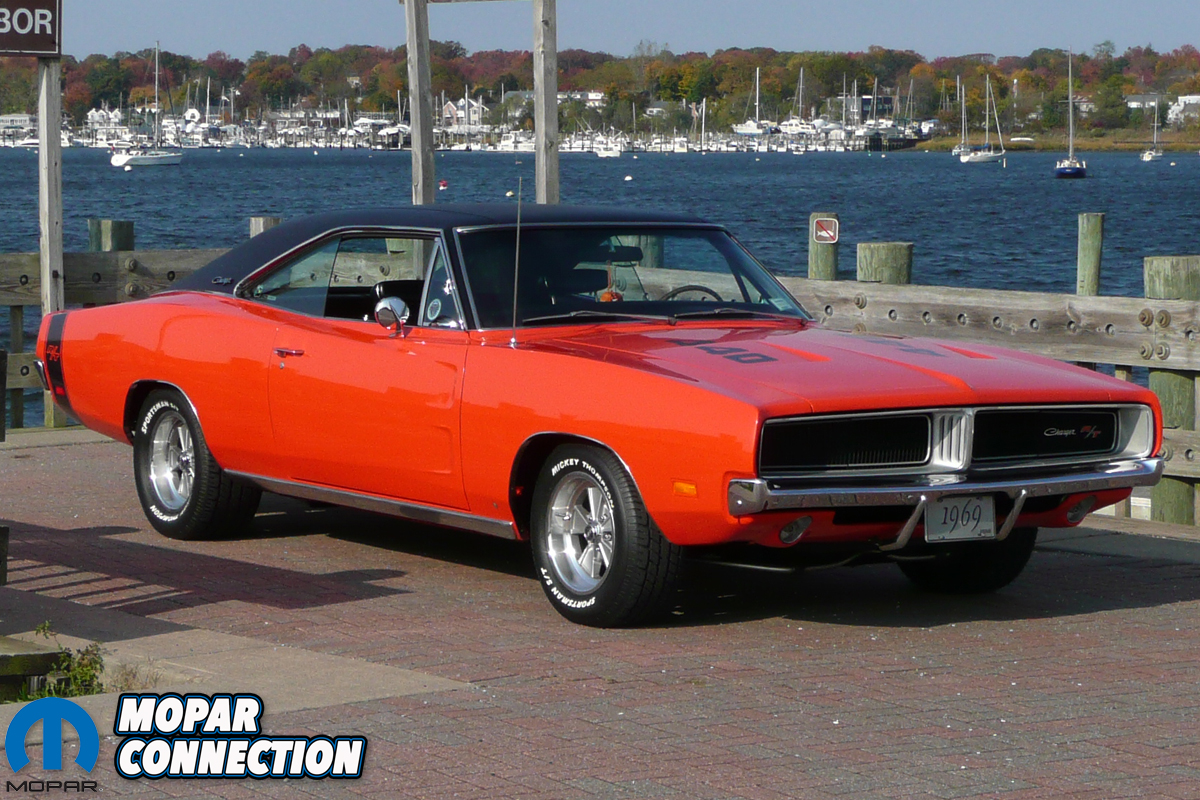