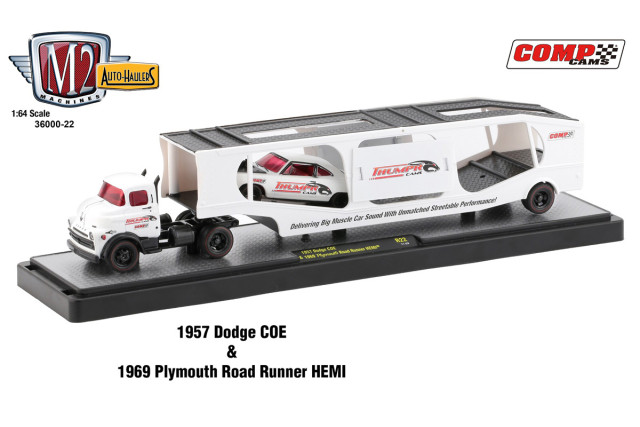 In a joint project between COMP Cams and M2 Machines, we are pleased to announce a new collectible hitting the markets for those mini Mopar toy collectors. A new production of M2 Machines’ popular retro 1:64 scale die cast auto haulers line-up celebrates the COMP Cams Thumpr Cam line known for delivering big muscle car sound with unmatched street performance. Each of the highly detailed collectibles includes a tractor-trailer and vehicle featuring the iconic Thumpr Cam branding, as well as a display base and acrylic case.

While they are making Chevrolet and Ford versions, of course the Mopar version caught our attention. For the Mopar fans, M2 has done a killer replica of a 1957 Dodge COE tractor-trailer car hauler with a 426 Hemi-powered 1969 Plymouth Road Runner on the hauler. It doesn’t get much cooler than that! These die cast auto haulers are the first Thumpr Cam toys on the market and can be purchased from the COMP Performance Group trailer at events across the United States this year, while supplies last. They can also be found on shelves in major toy retailers, including Walmart, Target and Toys “R” Us, across the globe and hobby shops. You’ll want to make sure you grab one quickly though as only 5,880 of each version will be available. 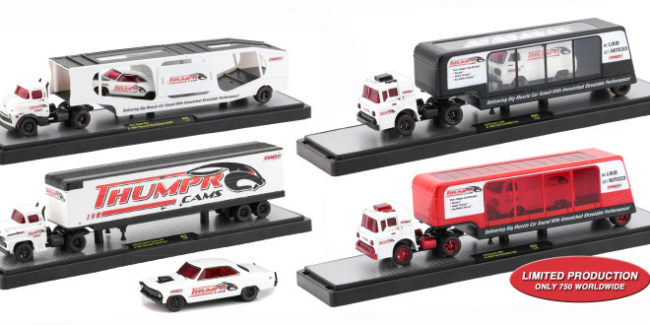