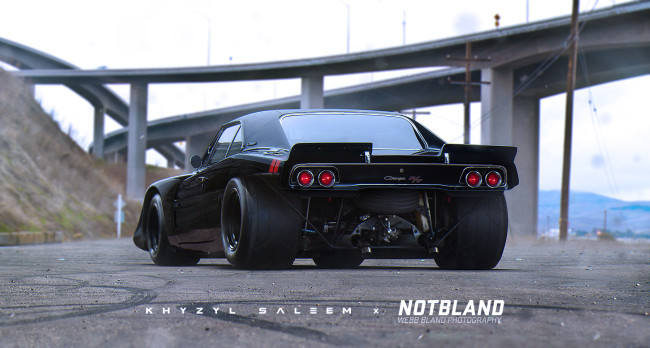 First of all, what you’re looking at is not real. No, nobody cut up a ’68 Dodge Charger R/T to create a body-over-tube-chassis LeMans-ready supercar. Rather, this is the imaginative creation of a digital artist Khyzyl Saleem, who drew heavily from the Porsche 917K LeMans-winning supercar. Y’know the one, the car that gave Porsche its first overall wins at the 24 Hours of Le Mans in 1970 and 1971, famous for its Gulf blue-and-orange livery. Anyways, Saleem happily questioned, “What if Dodge and Porsche collaborated to build a LeMans car?” and came up with this.

He writes, “[This is the] Charger R/TK17 (Group 5 inspired) – It’s always a great feeling when you collaborate with those you look up to. I’ve been following Webb Bland for so long, I never thought I’d call him my friend let alone work with the guy! Ha ha. I was pretty happy when he let me ruin this beautiful Charger R/T he shot, it was a lot of fun! Think of it as a mash between a Porsche 917k with the R/T flare & character. Not one for the purists, but I’m not sorry at all! Ha ha.

First beginning with a beautifully-shot photograph of an original ’68 R/T (photographed by Webb Bland), Saleem began to integrate key suspension and body flare pieces to marry the two cars. Obviously, the original second generation Chargers were designed with NASCAR in mind, but given the high speed success of the aero cars, it’s not too far out of the question to imagine Ma Mopar charging the “world’s oldest sports car race in endurance racing.”