Think back to the days when junkyards were littered with OEM parts and the occasional aftermarket score. Remember how easy it was to put together a decently fast build using nothing but used parts? How about that friend of yours that built a pretty bad ass street cruiser using nothing more than a used set of cylinder heads, a block that had been looked over and a camshaft with some decent specs? While it may seem like these days are long gone, companies like Edelbrock are working harder than ever to keep the spirit of inexpensive and impressive builds in a “always on the move” world alive and well. Since the early ’80s, the folks at Edelbrock have quite literally poured years with of time, money and experience into creating what it calls a “Total Power Package System”.

In this segment, we dive deep into each package that Edelbrock has to offer; all the way from the 318ci to the 440, and everything in between. And the best part is, you don’t have to be an eccentric engine builder or own a crazy expensive shop to install any of the garden variety of packages the company has to offer. As we detail below, Edelbrock makes clear that most anyone who knows their way around a set of hand tools can most certainly install one of its Total Power Package Systems in just a weekend worth of work – how’s that for having your cake and eating it too? 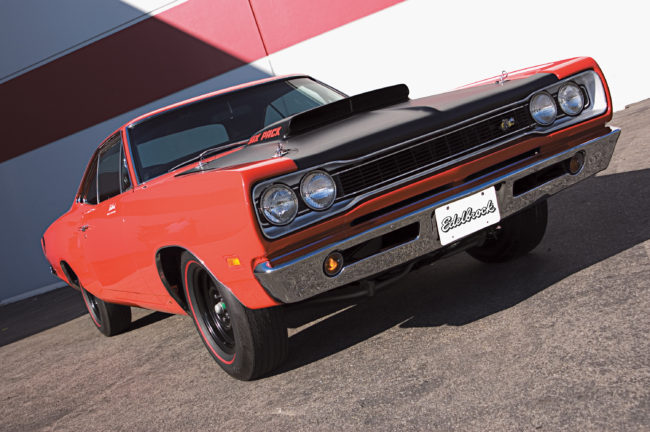 What Is A “Total Power Package System?”
In short, the Total Power Package System (TPPS) offered by Edelbrock is a pool of components offered by the Southern, California, company which are designed to work in conjunction specifically with your engine application. The packages, which are dyno tested combinations, are completely designed to offer the most power potential for that engine application. Edelbrock offers three levels of its Total Power Package System, ranging from mild for the street, to wild for the strip or twisties, depending on your goal for your vehicle. The package levels include (from street to race); E-Street Power Package, Performance Power Package and Performer RPM Power Package. Moreover, no matter which TPPS you decide to go with, each package features the following components; choice of intake manifold (EFI applicable); carburetor or throttle-body size; cylinder heads; camshafts and lifters; timing chains; gear drives; and valve springs (for OEM cylinder head applications or Edelbrock versions).

Aside from the obvious benefits, being that the TPPS is designed to provide you with the most power potential possible, while eliminating all of the guesswork of mixing and matching all of the above components, our friends at Edelbrock said the benefits go beyond face value. “The Power Packages are a package of top end parts developed by Edelbrock to guarantee a certain level of horsepower and torque on a given short block,” said August Cederstrand of Edelbrock. “These Power Packages are marketed towards engine builders, home hobbyists and anyone who wants to have a certain level of performance from their engine without having to have an immense data base of known horsepower combinations to draw from.” August told us depending on which TPPS you choose, some contain additional components, such as lifters, pushrods, head bolts, intake bolts and a gasket set. 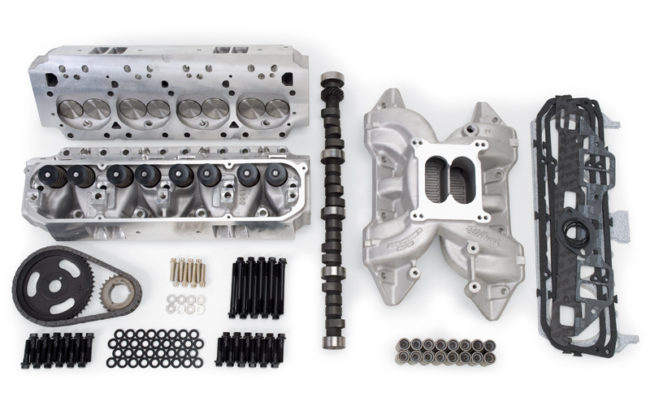 Everything Starts With An Idea
The hardest part of any good tech article is conveying the amount of resources a company uses in its research process. For this portion, we turned directly to August to fill in the blanks here, as he is our virtual Moparian tour guide. “Like all Edelbrock products, such as the Power Packages, it starts with a concept,” August explained. “We get ideas from all kinds of sources. For example, customers at shows we attend, sales staff, our engineering department, and numerous other instances. Those ideas are furnished into working prototypes where we then extensively test the product both on an engine dynameter, and in vehicles. Many times, when we develop new cylinder heads or intake manifolds, we will work with leading engine builders to have them independently test these parts for us as a secondary check to make sure we are going to deliver on what we say the product will do.”

August relayed that Edelbrock employs more than 6 full-time engineers, two full-time engine builders, 5 full-time EFI calibration specialists and 3 full-time supercharger calibration engineers. Albeit this doesn’t include the hundreds of other people in its manufacturing, and the foundry, that are focused on making what the company says is “the highest quality American made parts available.”

“We have 3 engine dynos – one of which is an eddy current dyno, good for more than 2,500 horsepower, and two in-ground wheel dynos, which we use for in-car testing and calibration,” August told us. “We don’t guess at anything, and we have the resources, data and the years of experience needed to design, develop and manufacture the best components in the country.” Case in point, August told us that its new Gen III Hemi cylinder head – which debuted at SEMA 2016 – merely started out as an idea in late 2015 with a meeting between the sales and the engineering departments on what direction to go with new cylinder heads. “These new Gen III Hemi cylinder heads and intake manifold are being met with great enthusiasm, which tells us that we are heading in the right direction. We are always looking for an area that no one else is servicing, and Mopar products have always been great performers for us. While other companies overlook Mopar enthusiasts, we embrace them, and are always open to make new horsepower producing products for that market,” August said. 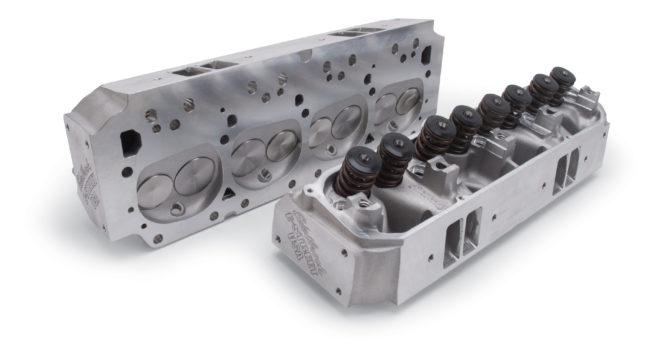 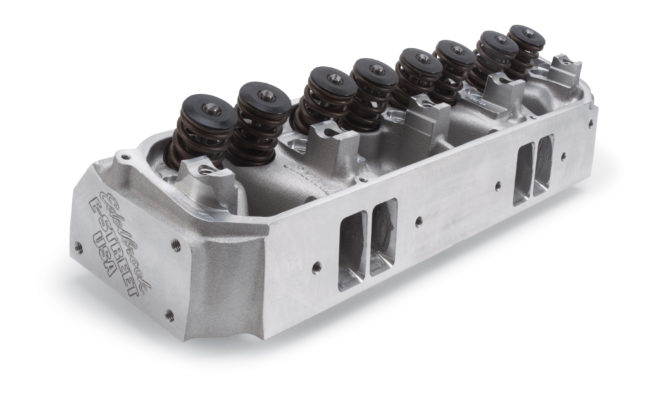 A Window Into Tuning
Of course, if you’ve ever modified your car, you’ll know that the absolutely key to success is dialing in the tune. Fortunately for us Mopar enthusiasts, Edelbrock goes a step further beyond the tuning process, as August laid out for us. “Testing and tuning for new applications such as Mopar (or any other manufacture) is very much the same,” August enthused. “After we have done the design phase, worked over the 3D printed models and have received working prototypes from the foundry, we can begin the testing phase to see if what we have designed will deliver on making more power and torque.” August told us that, in most cases, they can use that same 3D printed manifold to make dyno pulls on the engine dyno (or in-ground chassis dyno before) committing to a set of cast aluminum counterparts to save time and money. Those cost savings are a direct translation to the enthusiast who is purchasing these components, as well.

“In developing cylinder heads for Mopar applications, many times we have our work cut out for us, because some of Mopar’s cylinder heads flow very well, such as the Gen II and Gen III Hemi’s and Max Wedge’s,” August relayed. “But like with all cases, we start with a clean sheet of paper or CAD screen and design from there. Basically, every cylinder head or intake manifold that you see from Edelbrock has hundreds of hours of development in it.” Furthermore, August told us that testing and tuning any product takes the company many hours of dyno time, and that testing confirms that everything works from all design stand points; from casting quality, function and form. The company ensures that it meets the goals intended from the beginning of the project. “We pour an immense amount of time and effort in everything we do at Edelbrock to bring the absolute highest quality part to our customers – and being made in the U.S.A. means a lot to us and our customers also.” 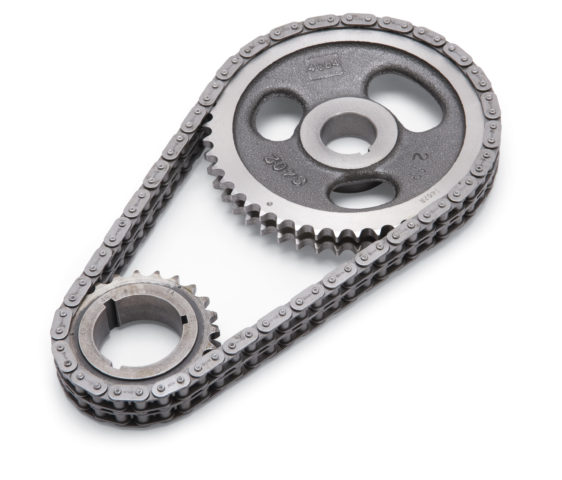 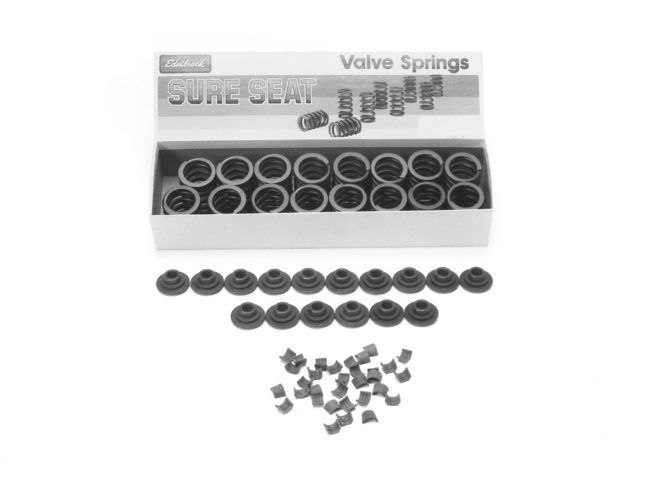 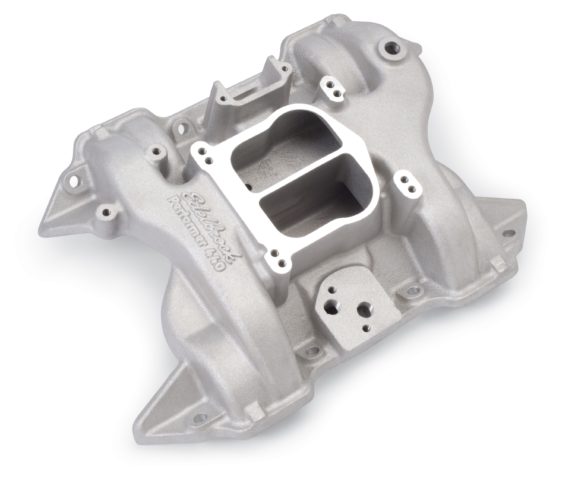 Detailing The Total Power Package Systems
As we mentioned earlier, there are three separate levels of TPPS’ available for Mopar enthusiasts to choose from. The beauty of these Power Packages is that Edelbrock lists each individual part that makes up the system themselves. This means that, if an enthusiast already owns that certain pair of cylinder heads, they can purchase the rest of the components from any Edelbrock retailer. While enthusiasts do have the choice of mixing and matching parts to create their own “Power Package System”, August recommends one of the company’s three solutions the first time. “That is the whole point of the Power Package. We have done the hard work of developing and testing a proven package of parts that will deliver the stated power over and over again with real world, reliable power. So, what makes up the TPPS available for Mopar enthusiasts?

“The “E-Street” refers to the most mild (but most of affordable) of our Power Packages,” August explained. These kits will have hydraulic flat cams and dual-plane performer manifolds. The “Performer” series is a noticeable upgrade from stock in terms of horsepower and torque, but still retains a tremendous amount of drive-ability. The “Performer RPM” packages is for the customer that wants the most power and torque, and might do some weekend drag racing at the local track.” August pointed out that, if we examine the Power Package for the Gen II 426ci Hemi engine stroked to 528ci on pump gas, it will reliably make more than 700 horsepower with a hydraulic roller retro-fit camshaft on the street. 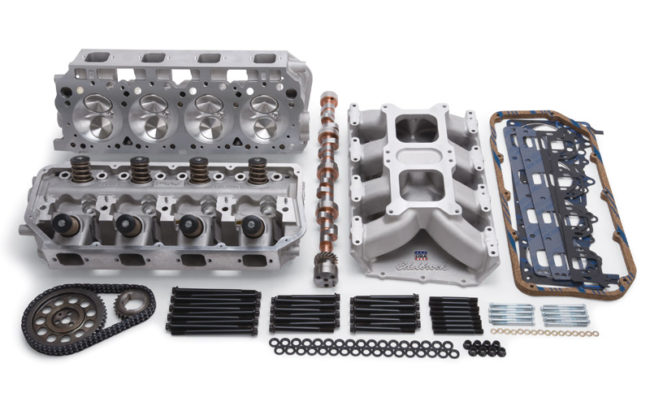 Final Thoughts
As we’re sure you’re already aware, Edelbrock offers Mopar components beyond the Power Packages. In fact, there are a host of other parts that complement the TPPS, and August said, they can be a starting point for many enthusiasts who will later upgrade to more power down the line.

“A good example is if an enthusiast might already have a performer carburetor on their engine – these packages are very easy to integrate into our Pro-Flo 3 EFI systems. This allows them to have all of the advantages of a multi-point, sequential EFI. Or maybe the customer wants to do more racing – we offer higher-flowing cylinder heads and manifolds beyond the Power Packages to help grow their program. When an enthusiast is purchasing an Edelbrock Power Package, or any other component in our catalog, they are benefitting from nearly 80 years of concentrated effort to manufacture the absolute highest quality parts that are made in the USA.”

In short, Edelbrock is proud to say that they design, engineer, cast, machine, test and develop only the best components, right here in the United States of America. How’s that for keeping your Mopar pure red, white and blue?

Ryan is known by his parole officer as an insufferably irritable jerk who often finds himself sleeping in other people's cars when he's not masquerading as an inner-city mall Santa 9 months out of the year. When not writing for Mopar Connection, Ryan can be found outside of the Circle K in San Dimas, CA.