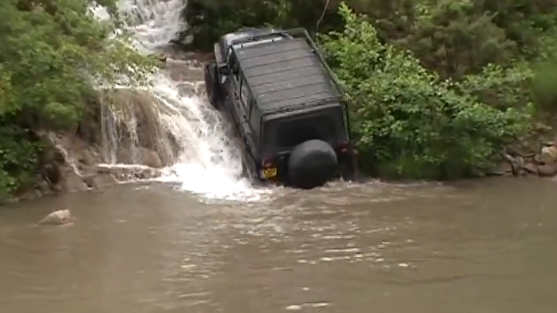 In the spirit of “Throwback Thursday,” we at Directly Connected Magazine wanted to show off some awesome aquatic Jeepin’ action from across the pond. In an expedition with a XJ and another JK, Joel Crenshaw’s 2008 daily driver JK with just over 64,000 miles managed to scale a very slippery waterfall slope on its third attempt.

The designated off-road trail is found in the Seven Sisters Quarry in Bathampton Down, a flat limestone plateau near the River Avon, England. The ’08 JK four-door is a proven mountain goat and since this video, Crenshaw has installed “a custom snorkel in so that I can avoid any future issues.”

The issues in question primarily revolve around the spring’s high water level, and the JK’s proximity to drowning it’s 6-cylinder. As many familiar with these Jeeps know that the factory location of the air intake puts it precariously close to low waterlines, making the snorkel a smart addition.

In addition to Crenshaw’s JK, another of his party – in a XJ surmounted the falls as well as another JK, a two-door, failed to make the climb. Although not the most daring of heights, it’s worth noting the near-stock setups of these Jeeps and the slickness of the rocks makes the two Jeeps’ success all that more noteworthy.