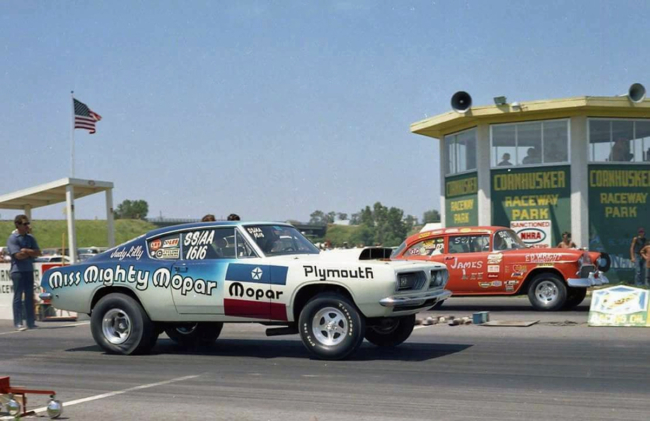 Once sponsored by Mopar, Lilly earned her “Miss Mighty Mopar” nickname. The Hemi Barracuda was hugely successful. Being one of the fastest cars in Super Stock eliminator, the Hemi chased down many competitors at the finish line stripe.

Unless you have been around the automotive scene for several decades, you probably thought ACCEL produced only high-quality ignition and fuel system pieces. However, that is not true. As described in the January 1978 Car Craft magazine ad, ACCEL expanded its line to include brake components. In the late 1970s, ACCEL developed its Deccel Premium Braking Systems, the go-to brake products for drag racers and street enthusiasts.

Super Stock (SS) eliminator star Judy Lilly and crew chief/husband (at the time) Dennis Maurer found it crucial to gain an advantage on the competition, so they equipped her Mopars with the Deccel Premium metallic pads and linings. The Deccel superior friction material firmly held her foot-braked Plymouths in the starting beams, and after a triple-digit MPH quarter-mile run, they safely and dependably brought her rides to a halt. 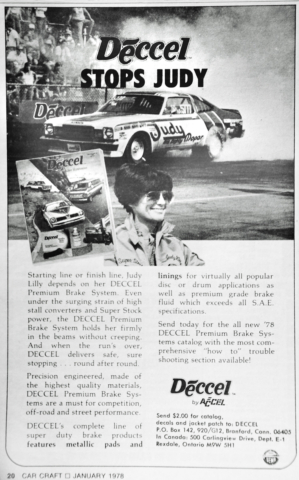 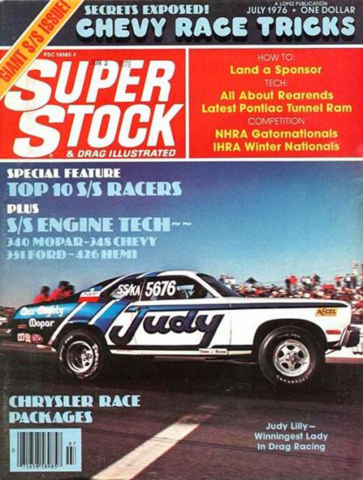 Above left: Super Stock drag racing star Judy Lilly relied on ACCEL products to motivate her “Miss Mighty Mopar” Plymouths. She also trusted ACCEL’s Deccel Braking Systems to supply her with guaranteed stopping power after a quarter-mile blast. This January 1978 Car Craft magazine ad shows Lilly’s last Super Stocker; a 360 equipped Plymouth Volare running in SS/NA. Above right: Lilly was a multi-time NHRA Super Stock Division Five champion and a three-time recipient of Car Craft magazine’s Super Stock drag racer of the year award. Lilly ran the 360 Duster for the ’74 through ’76 seasons. In ’74, the Duster ran in SS/MA, but as the NHRA continued to change the weight breaks on the combination, she moved to SS/LA for ’75 and SS/KA for ’76.

Lilly, better known as “Miss Mighty Mopar,” was one of the most respected and successful National Hot Rod Association (NHRA) Super Stock drag racers of all time. While she started racing in a ’61 Corvette, she earned her most significant victories while running Mopars. After the Corvette, she rowed her own in a ’67 440 Coronet followed by a ’68 Hemi Barracuda, a ’74 360 Duster, and a ’77 360 Volare (the last three Plymouths were Torqueflite automatics).

Lilly earned her Miss Mighty Mopar moniker when Mopar (Direct Connection) financially stepped in, sponsoring her Barracuda and her successive Plymouths. Lilly was a multi-time NHRA Division Five Super Stock champion, and she was a three-time Car Craft Magazine Super Stock Driver of the Year. In the late 1970s, Lilly retired from drag racing but resurfaced in the 1980s in a Pro Stocker. 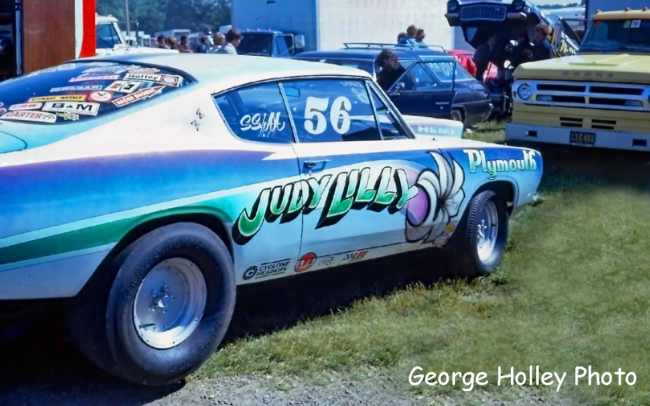 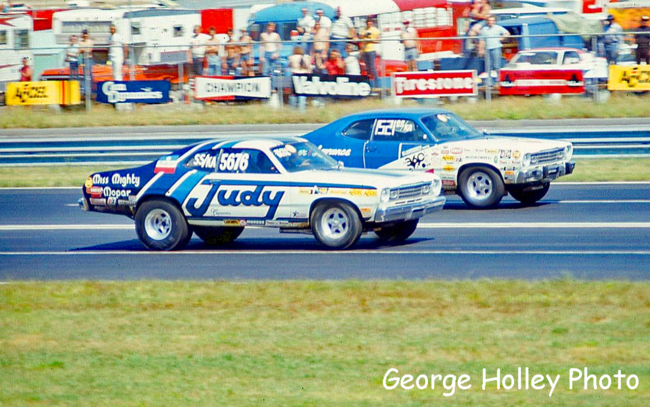 Above left: Lilly’s ’68 Hemi Barracuda had several paint jobs until she earned Mopar (Direct Connection) sponsorship in ‘72. The ’68 ran in SS/BA, and it moved up to SS/AA after a few years of competition. The photo was shot in the pits at the NHRA Springnationals in Columbus, Ohio, in ’72. Above right: By ’74, Mopar wanted Lilly in a more contemporary ride, so a 360 Duster was selected. Lilly continued her winning ways with the Duster. This photo was shot at the NHRA Summernationals in Englishtown, NJ. It looks like a class runoff (both SS/KA cars), and Lilly has a fender on an equally equipped Duster driven by Ed Hamburger.

Monetary constraints limited her success in Pro Stock, and because professional racing relies on cubic dollars, she soon retired from the NHRA competition a second and last time. As a testament to her driving achievements, she was inducted into the International Drag Racing Hall of Fame in 1998 and into the Colorado Motorsports Hall of Fame in 2005.

ACCEL’s earliest roots can be traced back to the 1970s as the high-performance ignition systems line for Echlin. ACCEL provided race quality ignition parts, alternators (and other charging system components), and the Deccel Premium Braking Systems. In the 1990s, Echlin purchased the Mr. Gasket line of products and retained the valuable and recognizable Mr. Gasket name. Echlin merged its ACCEL and DFI performance brands with Mr. Gasket’s catalog of automotive products. 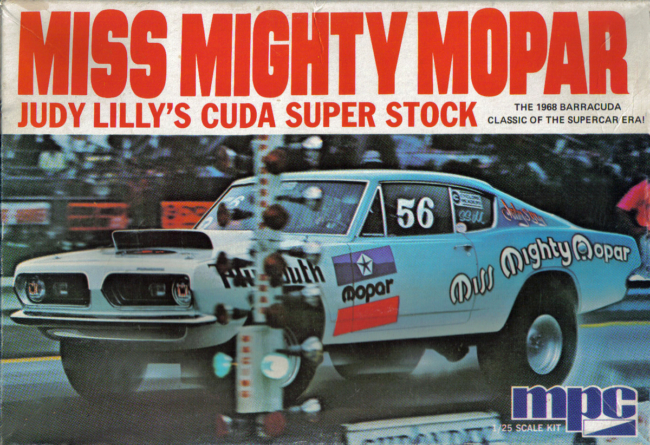 MPC immortalized Lilly’s ’68, Miss Mighty Mopar Barracuda in plastic. The Barracuda was well detailed as a 1/25 scale model. Today, purchasing an unassembled model in a sealed box will quickly set you back a few C-notes.

Since 2015, ACCEL has continued to advance the ignition and fuel system technologies that accompany the sister products from Holley. ACCEL offers ignition parts, including distributors, coils, spark plugs, fuel injectors, fuel pumps, electronic sensors, and hand-held tuners. When it comes time to hop up your ride, consider all the Holley products, and stop by ACCEL’s website for an overview of its newest components.

Technical Contributor Chris has been a college professor for 20 years; the last 15 spent at Pennsylvania College of Technology in Williamsport, PA. During the day Chris instructs HVAC and electrical/electronic classes, and high-performance classes, which includes the usage of a chassis dyno, flow benches, and various machining equipment at night. Chris owns a '75 Dart, a '06 Charger, a '12 Cummins turbo diesel Ram, and he is a multi-time track champion (drag racing) with his '69 340 Dart, which he has owned almost 30 years.