The camshaft is the brain of your engine; it tells the valves when to open and close, and in some cases, drives the distributor, oil pump, and fuel pump. All things being equal, the camshaft is what makes your engine into a fuel-friendly economy people mover, or an asphalt-blistering street demon. No single component on your engine can make this much of a difference. This means choosing the right camshaft is a very critical decision. Making that choice starts with deciphering what type of cam do you need: a flat-tappet or roller? Solid or hydraulic?

But what is a flat tappet cam? All cams rely on lifters to move the valvetrain. Traditionally, this means a flat lifter rides on the lobes of the camshaft. As the lobe moves through its rotation, the lifter moves up and down. The lifter is free to spin in the bore. Most engines built before the 1990s used flat-tappet cams and for good reason; it’s cheap and reliable. Above: Flat tappet lifters ride directly on the cam lobe, with just a thin layer of oil between the two. The downside to flat-tappet cams comes in the form of friction. The lifter is a flat chunk of metal riding on another flat section of metal that spins at several thousand RPM. This action generates a lot of heat. The reduction of ZDDP (zinc-dialkyl-dithiophosphate) in engine oils has led to some issues for breaking in a new flat tappet camshaft. New metals need the zinc-phosphorous additive to quickly harden the work surface so that it will live a long time. Without it, the fresh metal can quickly degrade and shavings can get circulated throughout the engine, wiping out the cam, lifters, and potentially the rest of the motor as well.

Aside from the friction, flat tappet cam design tends to be more conservative. If the ramp of the lobe is too aggressive, the edge of the lifter can dig into the lobe. To avoid this, the lobes are shaped with smooth ramps that open and close slowly. This means the valve is only open at peak lift for a short time, because the lifter quickly needs to start its closing cycle so that the action is smooth. While swapping out to a roller sounds great, there are plenty of engine designs out there that are not roller-ready. Some engines have thin lifter bores, which will break under the stress of a roller lifter and require a girdle.

One of the ways you can beef up your flat-tappet camshaft is with nitriding. COMP Cams’ Pro Plasma™ Nitriding is a patented, 36-hour process that uses pulsed nitrogen plasma in a vacuum-controlled environment to embed chains of nitrogen ions into the camshaft surface approximately .008-inch to .010-inch deep. “Our extensive testing here at COMP Cams has confirmed a 100-percent increase in strength and lubricity of the camshaft’s lobe surface for improved durability,” said Billy Goldbold, COMP Cams Valve Train Engineering Group Manager. Above: This is Comp Cams’ nitriding machine. They can treat quite a few cams at one time with this setup. “This fortified new outer layer is not a coating or polish. Rather, there is an actual change to the outer layer of the camshaft metal’s chemistry. The diffused nitrogen is forced into the iron lattice structure, increasing hardness and strength, while greatly reducing sliding friction,” Goldbold went on to say. Because the surface where the lifter rides on the lobe is subjected to such severe pressures, nitriding makes a big difference in extending the life of the cam.

So what is a roller cam? Quite simply, a roller cam is designed to use roller lifters. There are tons of benefits to rollers. First, is the reduction in friction. Because the lifter rides on the camshaft through a roller ball, there is very little friction. This means that the zinc additive has no effect on the break-in of the camshaft. Roller lifters do not have to be changed when a new cam is installed either, reducing the cost over time. This is only part of the story though, as the real juice is in the camshaft design.

Because the roller tip can easily follow a steep ramp, roller cam design changed radically. Instead of a slow ramp that opens the valve over 15-or-so degrees (same for closing), a roller can pop the valve open very fast, keeping it open at full lift for much longer and then slam the valve closed quickly. This allows more air and fuel to enter and leave the combustion chamber than possible with a flat-tappet. This makes more power, and does so more efficiently. This is also the reason that roller cams require much heavier valve springs to control the valve’s movement. Above: Roller lifters have large wheels that ride on the cam lobe, greatly reducing the friction and allowing for more radical cam profiles. 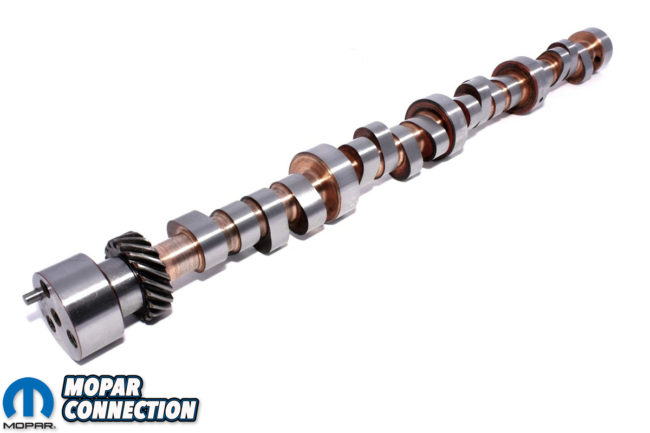 The downside of roller cams is that they tend to be more expensive and they are not available for every engine design. With those hardcore fast-ramp designs, the rest of the valvetrain has to be adjusted as well. Stock roller lifters are not up to the task of fast-ramping. They can break (we’ve seen it), and are often heavy. The valve springs are too light as well, which leads to floating issues, especially at higher revolutions. That said, nothing runs quite like a roller cam. Now that you understand the differences between flat-tappet and roller, let’s get into the solid versus hydraulic lifters:

So, what is a hydraulic cam? Dating back to the 1950s, the hydraulic lifter has remained the defacto lifter of choice for pretty much every manufacturer out there. The biggest factor for that is reliability and simplicity. Oh, sure, the hydraulic lifter itself is a complicated piece of machinery with several moving parts, and it requires oil pressure to function, but it is the secondary components that make it simple and reliable. Maintenance is the single biggest benefit of the hydraulic lifter; you just set it once and go. Unless you change something, you don’t ever have to get in there and adjust them again. The rocker arms can be simple stamped-steel jobs without any adjusters, and hydraulic lifters are quiet, as long as you have oil in the pan.

Where hydraulic lifters start to fail, is under aggressive cam profiles with high RPM stress. When pushed too hard, that smooth, quiet, self-adjusting hydraulic mechanism can pump up or bleed down, causing all kinds of problems, especially if you are on the big end of the track and need that extra push to take the trophy. The function of the hydraulic piston is to absorb the harder transitions in the cam profile. There is some bleed down designed into the lifter. Where this becomes a problem is when the lifter bleeds down too much because of stiff valve springs and an aggressive lobe design. Above: This illustration shows the difference between a flat tappet and a roller cam. The blue profile is a flat tappet, the ramps are slower to reduce the angles for the lifter. The red profile is a similar cam in terms of lift and duration, but the ramps are much faster, allowing for significantly better flow. Note that the added lift is removed from the base circle, so the cam is still the same overall diameter to fit into the journals. Above: Hydraulic lifters are the standard for street engines. These are quiet, efficient, and reliable.

Pump up is the opposite, where the lifter becomes over-extended. At high RPMs, the valvetrain can become unloaded; this is usually at the onset of valve float or even with valve bounce at closing. Because the lifter is reliant on oil pressure, the piston inside the lifter can push past its normal range. Under these conditions, the lifter can hold the valve off the seat when it should be closed.

Anti-pump up lifters can be used with aggressive cam profiles to effectively serve as a two-stage cam. This makes camshafts with lousy street manners livable, as the lifters don’t pump up until around 2,000 RPM. These are always noisy, especially at lower RPMs. There are multiple designs for these lifters, and an adjustable valvetrain is required to properly use them.

Lastly, what is a solid lifter cam? If you want to make the most power, solid lifters are the ticket. Some manufacturers have even used solid lifters in their highest-powered engines throughout the years. A solid lifter is exactly that: a solid piece of steel with zero moving parts (other than itself). There is nothing to pump up, bleed down, or fail. When set up correctly, a solid lifter is dead reliable, and it will do what you want it to every single time, until you have wear, of course. Above: Comparing the valve timing, this diagram shows two cams, the blue is a flat tappet 280 magnum, the red line is similar grind XE282 roller. Note how much longer (and further) the roller cam’s valves are open. This is all due to the ability to open and close the valves quicker without worry of the lifter digging into the lobe. Above: Solid lifters look the same, but they are solid pieces of steel, no springs or pistons on the inside.

That is the trick of solid lifters, they are great for lifting valves, but they have to be adjusted regularly. Even the smallest change in the valve train can open the valve lash, decreasing the efficiency of the engine and making a lot of noise. Adjusting valve lash is fairly simple, but it is a time consuming process that must be done with the engine at operating temperature. All of the valves have to be adjusted and set to the same lash. A solid lifter cam is certainly worth the effort if your goal is all-out power. Not only can you run a more aggressive profile, but when compared to a similar spec hydraulic grind, a solid lifter cam typically makes more power.

We asked Billy Goldbold about the differences in cam design between solid and hydraulic lifters, and he said, “With a hydraulic design, the velocity and acceleration need to be carefully controlled at the point where valve motion starts and stops. We assume the hydraulic lifter piston compresses about 0.004-inches in most cases before the valve moves. Hence the ‘ramps’ are very short. On a ‘tight lash’ solid lifter design, those ramps extend to about 0.006-inch to 0.010-inch tappet lift. On a loose lash design, the controlled rate of the ramp area can extend to 0.020-inch tappet lift, or higher in some special cases.” The end result of each design is a similar valve motion, but solid lifter cams have faster closing velocities. In a street application, this would be fairly noisy.

Ultimately, choosing the right camshaft for your Mopar project all depends on what you’re looking to accomplish with your engine build and what kind of driving and manners you’re looking for. A flat-tappet, solid lifter motor will definitely make some power, but it might be a little too rowdy for your tastes. Likewise, a hydraulic roller valve train might be the most reliable and “civilized” package possible, but not offer the audible crackle you like to hear from a built big block. Again, it all depends on what you’re looking for.

Jefferson has been in the automotive aftermarket industry for over 10 years. Based in Stillwater, Ok, Jefferson wanted to focus on the car culture that existed in the lower-Midwest United States. In 2002, Jefferson was recognized as a Top-100 Installer by Mobile Electronics Magazine, and is a MECP-Certified Installer and Product Specialist.