Shift Heads: A Brief History of The A-833 New Process 4-speed

Good things always happened when Mopar went racing. Or should we say good things happened when Mopar went racing while staring down a deadline. The 426 Hemi, the Torqueflite and the New Process 4-speed were all born of race-bred challenges that needed a solution. Pronto. Of those three, we’re going to discuss the New Process A833 4-speed, maybe the most bulletproof manual trans ever bolted into a factory musclecar.

Our story starts with the Little Old Lady from Pasadena. Or rather the car she drove. By 1962, the Super Stock Mopars were breaking records and breaking the hearts of those directing Ford and GM’s racing efforts. Unfortunately, in the particular class those cars were named for – Super Stock – they were also breaking manual transmissions. Like matchsticks. A fix was needed.

For the better part of 1963, the engineers worked on a new trans. You may be asking what of the Borg-Warner T-10? It was behind many a 409 and Ford 406. Even the injected ‘Vettes. But no, the 413 Maxies were too much for Mr. Warner’s hardware. And warranty claims would cost more than engineering a new trans. So onward the engineers went in their crisp white short-sleeved shirts, slide rules and pocket protectors. By the time they were done they had taken a chunk of cast-iron and cut away everything that didn’t look like a transmission – that’s how tough it turned out to be in testing. 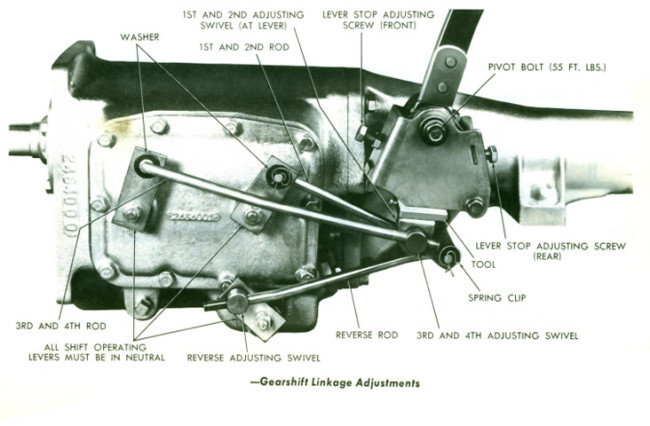 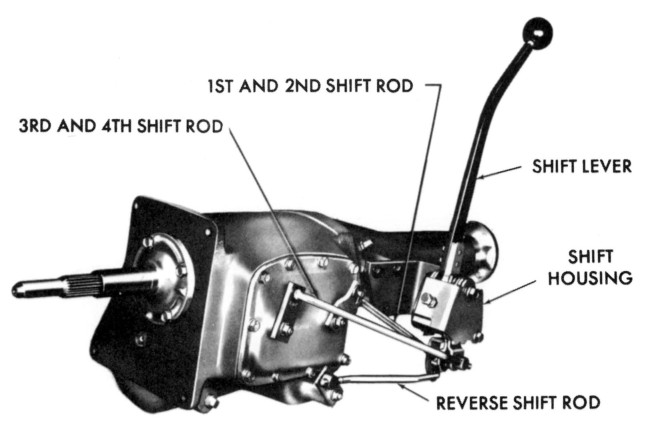 The Chrysler-owned New Process Gear plant in Syracuse, New York was chosen to manufacture the new boxes. Just in time for the ’64 new car roll-out. When it came to shifting duties, nothing but the best was pressed into service: The Hurst 4-speed shifter, then a relatively new product itself. The engineers decided to build a couple of versions of the new 4-speed, split along Chrysler car lines, the A-body and B-body. Small cars and big cars, basically.

Between the two versions the main differences were the extension housing and main shaft lengths, low-gear ratio and rear-flange size. The small car transmission has a 3.09-to-1 low gear, for obvious reasons. A big first gear gives smaller engines a jump off the line. 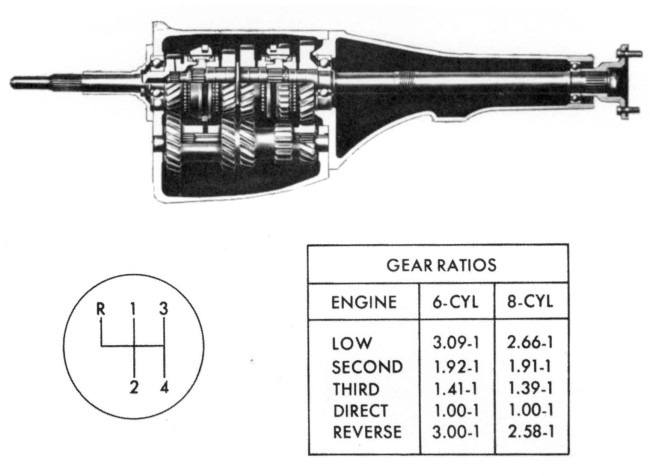 Had it not been for a minor wrinkle in the time-space continuum over at Chrysler Corp. (also known as the 426 Street Hemi) the gearbox may have remained unchanged until the end of its run. But the Big Orange Monster’s power demanded the New Process trans be upgraded. Another gearset was incorporated for the late ’65 Race Hemi cars and then the new ’66 Street Hemi models.

An 18-spline input shaft appeared, differentiating it from the smaller 23-spline, giving Mopar junkyard hoarders an easy way to find gold forever more. Again we refer to Passon’s expertise, “Bronze alloy bushings lined each gear now for aid in preventing gears from seizing to the mainshaft due to higher loads. The 18-spline came with a 307 bearing and retainer with a matching coarse-spline clutch disc (this would change to a 308 bearing ’68-72).” The whole thing was as tough as the Hemi itself.

And yet, a strange concession to the bean counters: all this beef was going to be stirred by a plastic spoon – the Hurst shifter was tossed for cheap Inland Tool & Machine junk. There was a synchronizer design change for ’68 with modifications to the strut key and slider design. Also, new Road Runner owners – and the magazines that tested the car – did not like the Inland rods and shifter one bit. They complained bitterly. Mopar listened and the Hurst unit re-appeared during the year. 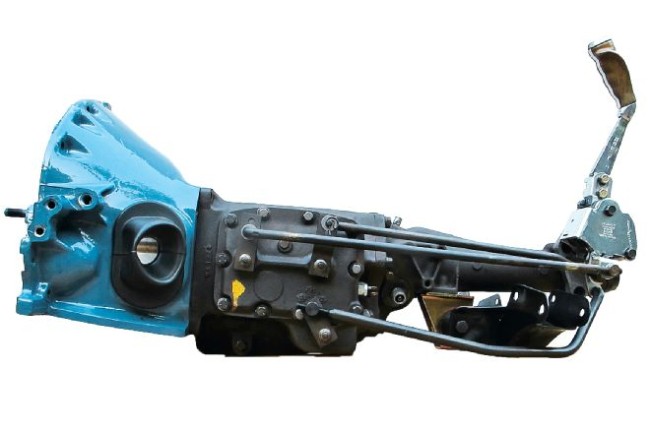 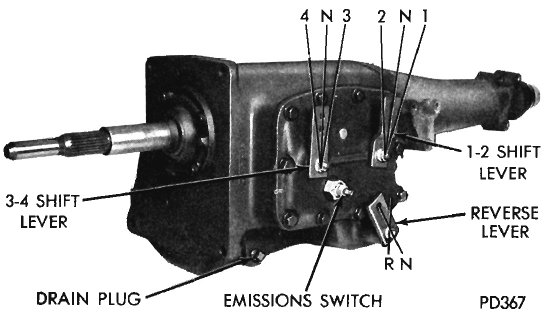 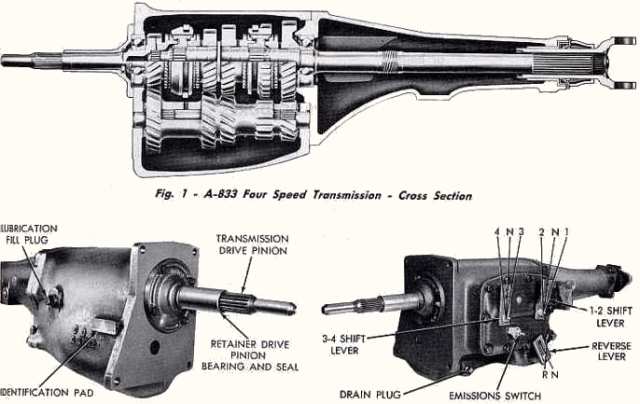 The new-model line-up for 1970 saw some changes for the A-833 as well. In mid-1970 the synchronizers and brass stop rings were redesigned. This meant less breakage on powershifts. It’s a design change that would be in place until the end of the transmission’s production life.

The new AAR Cudas and T/A Challengers enjoyed a first gear change to 2.47. The tailhousing now featured not one, but two mounting bosses, one for B-bodies and one for E-bodies. Conveniently, it makes identification of a 1970-up box easy versus the 1969-previous model.

The “big deal” for ‘Cuda/Challenger shift-it-yourselfers in ’70 was the new Pistol Grip shifter. Faux woodgrain plastic shaped like a gun grip attached to a flat chrome shifter was the hot set-up for the new 4-speed E-bodies. Though Car & Driver didn’t think much of it when they pulled their pistol grip handle right out of the shifter body in their AAR ‘Cuda test car. “This might explain why a year later the ’71 pistol grip handle is bolt-in and not clip-in”, says Passon. 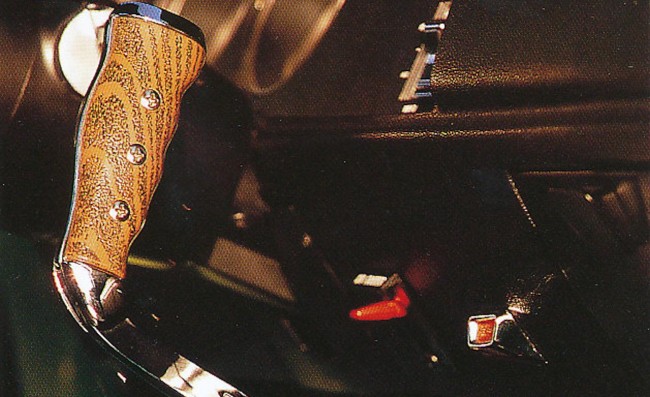 The end of the Mopar musclecar era in 1971 also saw the end of major running production changes for the A-833 (not counting the oddball mid-70s overdrive jobs). Sheet-steel interlock levers replaced the old pin-and-balls type. This meant new forged steel shift forks, replacing 1970 and previous brass. The 440 and Hemi cars received a new 2.44 first gear.

The New Process A-833 4-speed shifted on, in some form or another, through 1987, a testament to its bullet-proof design and engineering. Through the decades, it was fiercely shifted by Mr. 4-speed himself, Ronnie Sox, “Dandy” Dick Landy and Herb McCandless during the Super Stock wars, fulfilling its original purpose. It withstood the brutish power output of the race and street Hemi-powered Muscle Mopars and got Grandma down the road in her Slant 6 Valiant too. Indeed, it seems they built the perfect beast.

Special thanks to Jamie Passon of Passon Performance for additional information, text and imagery.